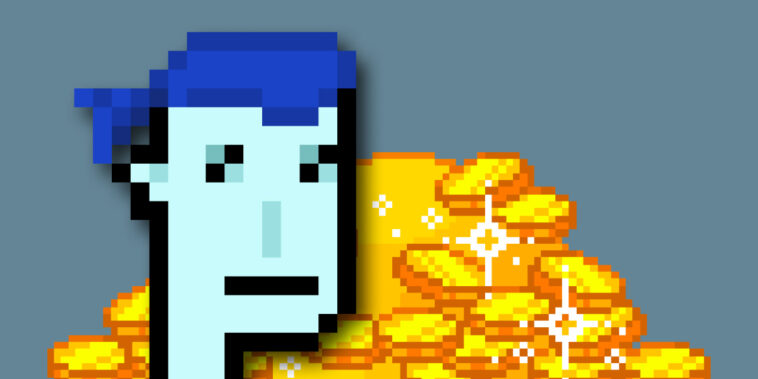 Chain Protocol’s CEO just spent an “otherworldly” sum on an Alien CryptoPunk NFT. In a tweet dated February 12, 2022, Deepak Thapliyal announced he bought the ultra-rare Alien CryptoPunk #5822 for 8,000 ETH. At the time of sale, that was worth over $23 million.

Not only is this the largest sale for a CryptoPunk, but it’s also one of the highest sales for a single NFT. In fact, most reports suggest Thapliyal’s purchase ranks as the fourth-highest NFT sale.

According to Thapliyal’s Tweet, he didn’t buy his CryptoPunk outright. Instead, he used Ethereum-based leverage from his account in the decentralized lending platform Compound Finance.

Announcing the buy, Deepak tweeted: “Thanks to @CompoundFinance I am able to still HODL #ETH while buying this. Basically Long’d ETH to punk-in 👽. #DeFi FTW”

Before Thapliyal bought his expensive extraterrestrial, CryptoPunk #7523 was the top-selling single NFT in this collection. Back in the summer of 2021, billionaire entrepreneur Shalom Meckenzie bought this “COVID Alien” NFT for roughly $11.8 million.

Wait a minute, who is Deepak Thapliyal?

Deepak Thapliyal is well-known in the crypto industry for creating the blockchain company Chain Protocol. Opened in 2014, this San Francisco tech company helps clients integrate with a cloud-based blockchain solution called Sequence. Chain Protocol already has some pretty impressive customers, including Visa, Citi, and Capital One.

Despite Chain Protocol’s success, Thapliyal is best known in the NFT community for his numerous acquisitions. Most famously, Thapliyal bought an M3 Serum NFT from the Mutant Ape Yacht Club for roughly $6 million. Deepak Thapliyal also made headlines for buying Bored Ape #232 for about $2.8 million.

As if that wasn’t enough, you can also find over nine Doodles, a few additional Bored Apes, and Adidas Originals NFTs in Thapliyal’s collection.

What makes CryptoPunk #5822 worth millions?

CryptoPunk #5822 is valuable because it’s in the “Alien” subcategory. Of the five CryptoPunk “Types,” Aliens are the rarest. Out of 10,000 CryptoPunks, only nine are Aliens.

Although these features make #5822 incredibly rare, it’s not the rarest CryptoPunk in existence. In fact, this NFT is one of the “least rare” in the Alien subcategory. For instance, CryptoPunk #7804 has a forward-facing cap, pipe, and small shades, each of which isn’t as common as the bandana.

That being said, holding an Alien CryptoPunk still puts Thapliyal in an exclusive NFT clique.