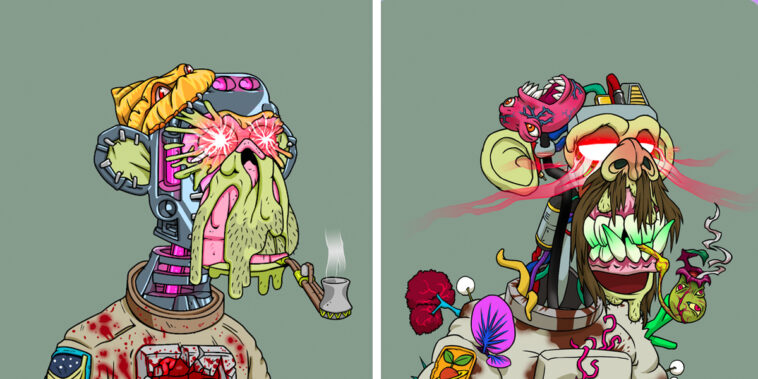 Mutant Apes #28904 and #28905 contain the same attributes of #9452: laser red-eyes, a pipe protruding from their mouths, an astronaut suit, and robot skin. Thapliyal bought the initial Ape from the same owner, putting that former owner’s gross profits at 572 ETH.

The Chain CEO has recently publicized his enthusiasm for the Bored Ape Yacht Club, tweeting:

“After my purchase of a Bored Ape, I realized that this #BAYC movement is real. We are at an intersection of history being made and we can choose to ignore it and go one way or fully embrace it and go the other way. I chose the red pill ser.”

Thapliyal is also the owner of one of the last remaining Mega Mutant serums, which he purchased after a bid of 1,542.069 ETH ($5.8 million at the time). He is currently working with people involved in a popular metaverse to set up a watch party for when he’ll have his Ape drink the serum.

While it may be coincidental, Thapliyal recently purchased a Gold Ape from Pranksy for 420.69 ETH. The Gold Ape Mega Mutant is one of the few remaining Mega Mutants, along with the Cheetah Fur Mega Mutant.

The Mutant Ape Yacht Club is a subset of the popular Bored Ape Yacht Club (BAYC). Midway through 2021, Bored Ape owners were airdropped one of three types of serum: M1, M2, and Mega Mutant.

Although the Mutant art has had critics, the MAYC mutants have offered buyers an opportunity to enter into the Yacht Club at a lower price point, and Mutants are widely celebrated as being “part of the Club.”

All parts of the BAYC ecosystem have been surging recently, aided by the tailwinds of an impending $APE token drop and a videogame. Currently, the MAYC floor (the lowest price you can buy into a collection) is at 15 ETH, meaning Thapliyal paid 195 ETH over the floor for his two Mutants.

Thapliyal’s desire to complete the set (often referred to when an Ape owner has both the parent Ape and its two Mutants) also likely played a role in the high price.

The previous owner of the set (@JohnKnopfPhotos) thanked Thapliyal in a tweet on Wednesday, writing:

“I minted my space ape 8 months ago. The entire set just now officially SOLD to @dt_chain for 347 ETH for the Space Ape and 225 for the mutants with a total of 572 ETH for the complete set. Huge congrats to @dt_chain! Enjoy this collection! Thanks @BoredApeYC!!!”