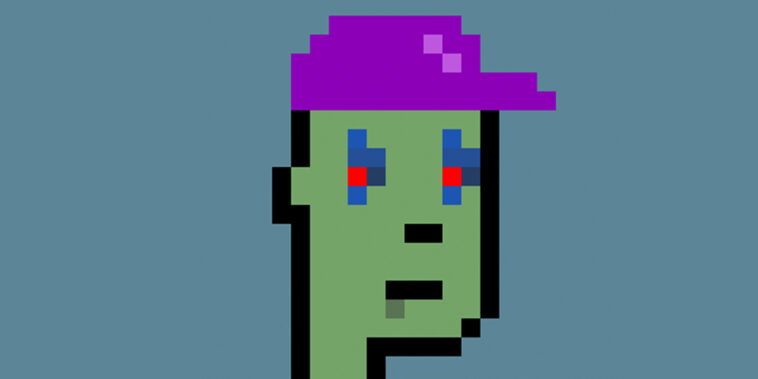 The cryptocurrency payment company MoonPay made another huge purchase last week, spending a jaw-dropping $3.09 million (900 in ETH) on a single NFT.

It should come as no surprise to people in the NFT space that the high price was paid for a CryptoPunk. Since launching in 2017, the 10,000-piece collection of pixelated PFP avatars has recorded over $1 billion in sales on OpenSea, the most prominent marketplace for non-fungible tokens.

MoonPay, which dubs itself as a “gateway” to digital currencies and assets, is often referred to as a crypto concierge service. Recently, the company made headlines helping the celebrities Jimmy Fallon and Post Malone purchase Bored Apes from the esteemed Bored Ape Yacht Club collection.

After MoonPay’s CryptoPunk purchase on January 6th (which was not surprisingly the highest NFT buy of the week), the company tweeted “Guess…” alongside a picture of the Alien Ape with a purple Beanie.

Of course, NFT Twitter ate it up, and speculation of who the company had bought the NFT for ranged from Lebron James to the Queen of England. “The internet never loses.” Especially not when you throw it an alley-oop like a $3 million digital asset that could be transferred to anyone in the world.

The company also purchased another NFT around the same time from the popular World of Women collection for around $25,000, which was later sent to the cryptocurrency wallet of superstar actress Eva Longoria.

She tweeted, “Female-led project with purpose and meaning?! No brainer for my first purchase! @worldofwomennft,” and thanked Moonpay for helping her with the purchase.

MoonPay holds other NFTs in their OpenSea Wallet, including seven Bored Apes, two CryptoPunks, one Mutant Ape, and one CloneX, among others.

CryptoPunks are also considered a historic NFT collection. First released in 2017 by Larva Labs to experiment with digital ownership and see if there was a market for it, they were given away for free to anyone with a crypto wallet willing to pay the gas fees, which at the time was about 11 cents.

Since then, the collection has risen to fame and is considered by many to be the OG of generative NFT art collections. Multiple CryptoPunks have sold for millions of dollars and are owned by celebrities including Jay-Z, Gary Vee, Logan Paul, and Snoop Dogg, and the collection even inspired changes to the Ethereum network.

In November 2021, MoonPay raised over 550 million in funding. Today, the company is currently valued at around $3.5 billion.

If there’s someone on the other end of a crypto wallet waiting for CryptoPunk #2681, as most NFT and CryptoPunk enthusiasts assume there is, then it looks like the company has made another good move.

We’ll be paying close attention to see how it plays out.