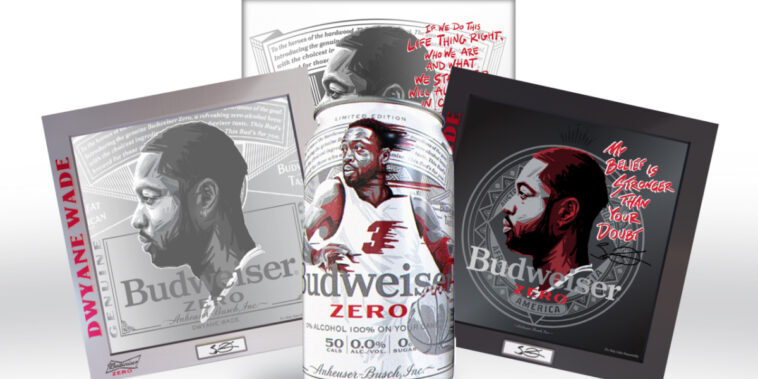 The former Miami Heat NBA superstar Dwyane Wade is expanding his efforts to bring Budweiser Zero into the realm of NFTs and the metaverse by partnering on a new set of limited-edition non-fungible tokens (NFTs).

The NFT collection will officially drop on May 24th and is titled “Budverse Legends: Dwyane Wade x Budweiser Zero Edition.”

Beginning on May 10th, U.S. fans 21 and older can also purchase custom Bud Zero cans that come with Wade’s likeness, inspirational quotes, and the potential to unlock each tier of the upcoming NFT collection. They can be purchased on ShopBeerGear.com.

Budweiser Zero is the first non-alcoholic and zero-sugar brew from Budweiser, and it was cofounded and developed by Wade himself.

The NFT collection will be available in three tiers:

Another positive is that the net profits from the NFT drop will be donated to create a fund for minority-owned businesses in underserved communities around the U.S. The full collection will be available on May 24th at 2 p.m.

The fact the 13-time NBA All-Star is continuing to invest in NFTs should come as no surprise. NBA superstars, teams, and even the league itself have proven to be pioneers in the NFT space time and time again.

The National Basketball Association (NBA) made one of the biggest moves in sports toward Web3 and blockchain technology when it partnered with Dapper Labs in 2020 to launch its own NFT marketplace NBA Top Shot. The marketplace allows users to buy, sell, and trade NBA collectibles, videos, and moments as NFTs — and it’s been a huge success.

Other basketball and NFT-related news we’ve reported on here at Rarity Sniper include:

Outside the NBA and college basketball, Snoop Dogg, Gary Vee, and the Solana-based NFT collection DeGods‘ recent purchases of significant ownership stakes via NFTs in teams in “The Big 3,” Ice Cube’s 3 X 3 basketball league, has been making NFT headlines.

Although NFT collectibles and blockchain technology are being used by many sports, from soccer to the Ultimate Fighting Championships (UFC), the NBA and many of its players, (past and present), seem to have a “jump” on the competition.

Let’s see if D-Wade can deliver a fire NFT collection — or should we say in honor of his old team that he led to three NBA championships — bring the Heat.