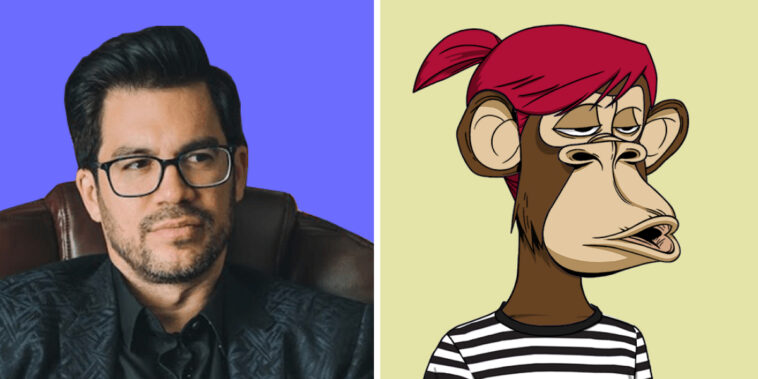 Entrepreneur Tai Lopez recently aped into the Bored Ape Yacht Club, purchasing Ape #7899. But unlike other celebrities who have used their Apes as status symbols, changing their profile pics to their Apes and sending welcoming tweets to the community, Lopez has another idea: a giveaway of the Ape worth around $240,000.

Lopez tweeted the giveaway from Stockholm, Sweden, where he said in a Facebook live stream that he is looking at art and thinking about purchasing a nightclub:

As stated in the tweet, the giveaway does not come without strings. Lopez is reserving the giveaway spots for those that make it onto his NFT drop’s allowlist. The NFT drop, called the OG (original garage) social club, is light on specifics at the moment, but Lopez says he “is already fulfilling the roadmap” and that he will bring “value” to the community.

Bored Ape #7899 is a clean six-trait Ape with short, red girl’s hair, the “phoneme ooo” mouth, a striped t-shirt, and presented against a yellow background. It is ranked #7635 in rarity out of the 10,000 Apes in the collection.

The giveaway of #7899 underscores the value of the Bored Ape Yacht Club NFTs in general and the price they command. While there are many giveaways in the NFT space, few if none approach the value for which Lopez purchased #7899, which many would consider “life-changing money.”

The purchase and giveaway come when celebrities are buying BAYC NFTs en masse. Just in the past few weeks, Meek Mill, Serena Williams, Neymar, Lil Durk, Kevin Hart, Paris Hilton, Gwyneth Paltrow, and Justin Bieber have purchased Apes, much to the enjoyment or chagrin of their fan bases.

The celebrity purchases underscore the Yacht Club’s transformation from scrappy, underdog club to a Veblen good — a term that signifies an object that becomes more in demand the higher the price gets because it is seen as a status symbol.

It remains to be seen if the giveaway will cause a run on Lopez’s Discord and lead to the all-familiar Discord grinding activity where members need to complete tasks or send a certain number of messages to gain “levels” and receive an allowlist spot.