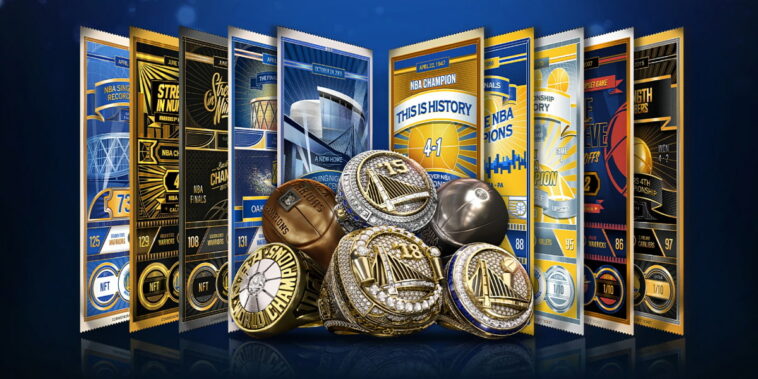 Fans of the Golden State Warriors and anyone interested will have the opportunity to mint some sports non-fungible tokens with IRL utility: a 2022 GSW NFT playoffs set that has real-world prizes associated with them. The drop will take place on April 15th in the FTX US marketplace.

The 3,000 NFTs will be randomized into 12 designs. Some of the real-life rewards tied to the NFTs include a spot aboard the Warriors’ championship float, a 2015 Warriors Championship Ring, various autographed sports memorabilia, and playoff tickets.

Brandon Schneider, the Warriors President, said the NFTs allow the team to interact with fans digitally. In his words, because “99 percent of fans” will never go to a game at the Chase Arena (where the Warriors play), the team needed another avenue to interact with them. Finding digital ways to engage fans “has been critical.”

Anyone who purchases one of the 3,000 NFTs will have a chance to win one of the physical prizes, with just one lone exception: The Gold Bar Access Pass, which can only be won at an auction. The winner of that auction will receive an actual gold bar and tickets to each of the Warriors’ home games during the playoffs.

Part of the profits from the NFT mint will go to the Warriors Community Foundation, which works to support youth and education in the Bay Area.

Sports has always been about passion and entertainment, and judging by the past few years in non-fungible tokens, that has carried over to sports NFTs.

Two companies have made hay delivering sports NFTs to audiences since 2020: Dapper Labs in North America and Sorare around the world. Both have valuations in the multiple billions, have led huge funding rounds — including Sorare’s $600M+ round in 2021 — and both are among the top NFT companies.

Observers believe that part of what makes sports good material for NFTs is an IRL natural extension: trading cards. Dapper Labs’ and Sorare’s products differ primarily in style (Dapper’s are short videos while Sorare’s are static), but they are both seen as extensions of the items that sports fans have collected for decades.

This natural evolution has made both companies profitable as millions of sports fans have flocked to their platforms to play the NFT trading card games or simply collect. And as Dapper Labs and Sorare have had success, more sports individuals and teams have launched their own NFT collections.

Time will tell if individual team NFTs like the Golden State Warriors collection continue to succeed. But if more athletes and teams implement their NFTs like GSW (with IRL utility), this could be an exciting time for digital-savvy sports fans.