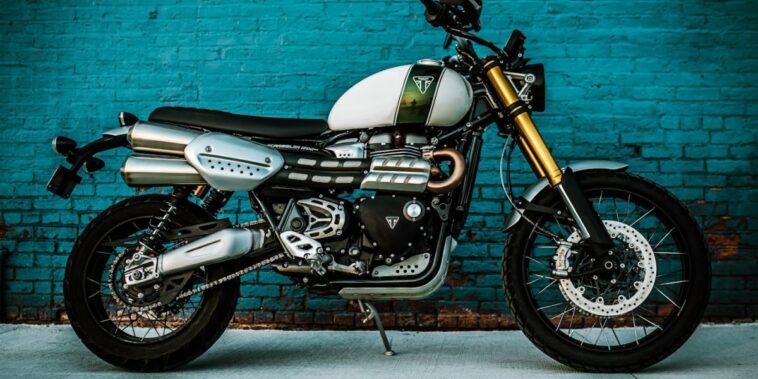 Anyone with a VeVe app on their phone could buy this official Triumph Scrambler 1200 NFT and display it on their in-app showroom. Each of these 9,007 NFTs will be up for sale on VeVe’s mobile NFT marketplace. Current reports suggest it will cost 165 VeVe gems (or about $85) to mint one digital Triumph motorcycle.

In addition to a detailed 3D replica of 007’s motorcycle, NFT owners will get access to exclusive audio files. Like other NFTs on VeVe’s platform, you can use augmented reality to admire your digitized Triumph Scrambler 1200.

Triumph’s Scrambler 1200 makes a memorable appearance in the film “No Time To Die” as James Bond escapes the sinister grasp of SPECTRE. After knocking out one of SPECTRE’s bodyguards, Bond cruises on his stylish Scrambler through the cobblestone streets of Matera, Italy.

MGM specifically asked Triumph to design the Scrambler 1200 for stunt scenes in the recent James Bond film. Along with the Scrambler 1200, Triumph created the Tiger 900 for memorable action sequences in “No Time To Die.”

James Bond’s owners MGM Studios and EON Productions announced an official partnership with VeVe before “No Time To Die” hit theaters in 2021. Since then, VeVe has dropped a few 007-themed NFTs related to the 25th Bond film.

VeVe’s parent company ECOMI has secured many enviable partnerships with pop culture icons. On top of the James Bond franchise, VeVe also has connections with the following global brands:

People who have a VeVe app could view their NFT collectibles in a “virtual showroom” or show them off on VeVe’s social media page. The New Zealand-based company allows NFT holders to post their favorite digital collectibles on sites like Twitter or TikTok. VeVe also offers unique augmented reality features to make NFT collecting extra immersive.

Anyone with an iOS or Android device could download the VeVe app.