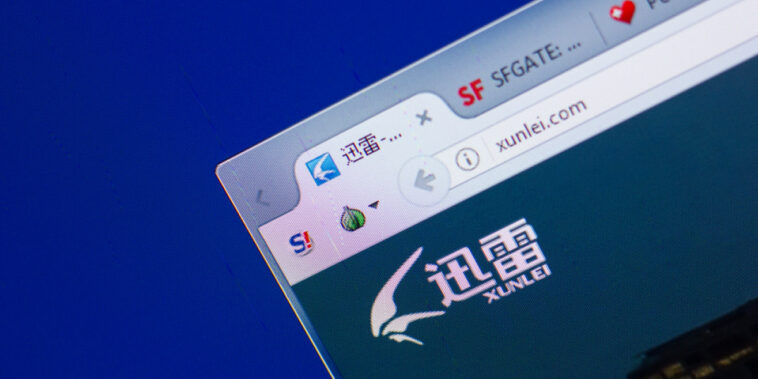 Adding to the mad rush of non-fungible token (NFT) marketplaces launching in 2022, Chinese cloud-computing company Xunlei announced it has launched an innovative NFT marketplace. The NFT marketplace would focus on enterprises looking to market directly to and target customers.

Xunlei Chairman and Chief Executive Jinbo Li said that he is “pleased” Xunlei is entering this emerging industry. A goal would be to create value for existing partners and customers in this new and exciting endeavor.

The marketplace will run on Xunlei’s ThunderChain blockchain, which can process 1 million transactions per second. In addition to the traditional art pieces that could be minted as NFTs, the Xunlei marketplace will be able to transform audio and video clips, event tickets, and collectibles into the NFT format.

This NFT functionality would make Xunlei’s marketplace on par with the functionalities of top marketplaces on the Ethereum blockchain, including OpenSea and LooksRare. There’s no clue who it would serve — whether it would be just for mainland China citizens or a more global marketplace.

While Banning Crypto, China Has Allowed for NFT Purchases

China, of course, has had a harsh run with cryptocurrency over the past several years. Even as some of the largest mining pools used to take place within Chinese borders, the government has sought to ban cryptocurrencies at large and succeeded in doing so last year.

NFTs, or one-of-a-kind digital assets stored on the blockchain, have remained unscathed, however. Recently, China issued a statement saying that the buying of NFTs would remain legal, though experts wondered how that would be possible without cryptocurrency.

Xunlei’s marketplace may allow for purchasing NFTs with Chinese fiat currency, like some American platforms. NBA Top Shot, for instance, allows for the purchase of NFTs on the Flow blockchain with debit or credit cards, and Coinbase is reportedly working with Mastercard to allow for the purchase of NFTs on their marketplace when it launches on February 24th.

Allowing Chinese citizens to buy NFTs with fiat would keep China’s ban on cryptocurrency in place while allowing for the legal purchase of NFTs.

Xunlei’s news, while surprising given the company’s location, is not necessarily a shock. Over the first two months of 2022, a few NFT marketplaces have sprouted up with the hope of challenging OpenSea for supremacy, and it seems more companies are announcing marketplaces by the week.

Just recently, Salesforce, a CRM company based in the United States, announced that it would create a system by which users could create NFTs and a possible Salesforce NFT marketplace.

Two new NFT marketplaces were launched in the past couple of weeks, with token airdrops aiming to hook users into the marketplaces’ ecosystems. And Coinbase is launching its NFT marketplace later this month.

Xunlei’s marketplace may end up being similar to Salesforce’s possible marketplace, given the similar products each company puts out and the role each plays in their respective economies.

The general gist behind them is that marketers are becoming more interested in NFT technology as it moves beyond the novelty phase. They want to leverage the technology to cater to NFT collectors or an intended audience.

Suppose Xunlei’s marketplace, focusing on companies producing NFTs for customers, is successful. In that case, the NFT landscape may see an era of niche marketplaces similar to shopping malls where people can find a specific type of NFT they are searching for, rather than the free-for-all on OpenSea and others.