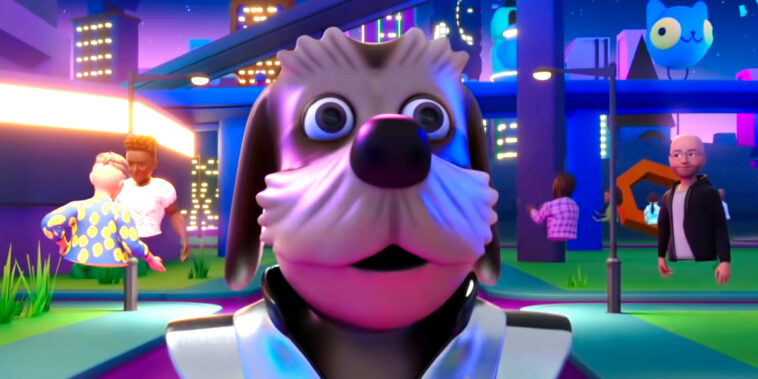 Meta, previously known as Facebook, just showcased their version of the metaverse in a Super Bowl commercial featuring an out-of-work animatronic singing dog.

The ad highlights the company’s Quest 2 headset, which is currently on sale for $299. As people have become more interested in the metaverse, the company has seen an increase in sales of VR headsets.

The commercial depicts an animatronic band with a gig at a Chuck E. Cheese-style arcade restaurant. When the restaurant goes out of business, the band is separated, and the lead singer is shown going through a myriad of rough times.

Finally, the dog visits Horizon Worlds, Meta’s virtual-reality platform, and is reunited with his bandmates in a digital version of their old arcade restaurant.

The ad intends to show that the metaverse is a novel place where “old friends” can have new experiences. However, though Meta is in many ways leading the rush towards the metaverse, their dismal first-quarter earnings report reveals not everyone is as excited about Meta’s version of the metaverse as the company itself is.

Responding to the report, Mark Zuckerberg told investors: “Although our direction is clear, it seems that our path ahead is not quite perfectly defined.”

The commercial was met with mixed views on Twitter and social media, with many complaining it presented an almost apocalyptic version of reality. Regardless of the critics, we should expect much more from Meta in the future when it comes to the metaverse and NFT technology.

Metaverses, NFTS, and Crypto at the Super Bowl

Meta was far from the only big company to present crypto and metaverse-related technologies at the Super Bowl. Other ads by Crypto.com, the new owner of the arena where the LA Lakers host games, and crypto wallet Coinbase were run during the game. Even the National Football League gave exclusive commemorative NFTs to all attendees.

Although the halftime with Eminem and Snoop Dogg disappointed some NFT fans, particularly those involved in BAYC who were hoping the rap superstars would find a way to incorporate their Apes into the show, the event was still a win for the NFT and cryptocurrency communities.

And perhaps the sheer quantity of crypto ads and NFT projects that dropped this past Sunday around one of the most important cultural events in the U.S. indicates not that these nascent technologies are going mainstream but that they already have.