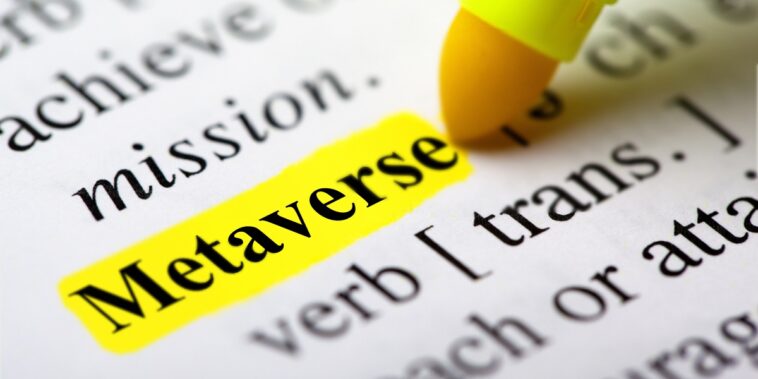 According to the Oxford University Press (OUP), the word “Metaverse“ is in the running to win the Oxford Word of the Year (WOTY).

The Word of the Year competition was launched on November 22nd, 2022 and this year is the first time the public can participate in voting. There are two other words or terms in the competition: They include “#IStandWith” and “Goblin Mode.”

The metaverse is a term coined by author Neil Stephenson in his science fiction novel Snow Crash. However, the concept didn’t really take off until Facebook officially changed its name to Meta in October, 2021.

In the video released by Oxford University Press, the metaverse is described as an immersive “virtual reality environment” where users can interact with each other’s avatars and surroundings. Unsurprisingly, OUP said the word has quadrupled in popularity from October 2021 to October 2022.

Oxford University Press also suggested that as more work-related and social activities occur in virtual reality environments, there will likely be more discussions about the “ethics and feasibility of an entirely online future.”

The other two words in the running for WOTY include #IStandWith, a phrase that’s often used by political activists, and “Goblin Mode,” — a post-Covid-19 concept referring to someone who rejects a return to normal and continues doing what they want. The three phrases were chosen through an analysis on a language data system that narrowed down the top words.

To vote on the Word of the Year, people can visit Oxford Languages’ website. So far, over 235,000 votes have been cast. Voting closes on December 2nd, and the winning word will be announced shortly afterward.

The Metaverse Grows in 2022

For folks paying attention to Web3 news, it should come as no surprise that “Metaverse“ is in the running for Oxford University Press’s Word of the Year. At Rarity Sniper, we’ve covered hundreds of stories about the metaverse this year. Here are three of the most recent headlines from the metaverse.

First, on November 7th, 2022, Japan’s largest bank MUFG partnered with ANA Holdings to enter ANA’s upcoming GranWhale metaverse. The metaverse is expected to launch sometime in 2023 and will let users explore 3D worlds and browse stores with their avatars.

Next, FIFA, agreed to a multi-year deal with the Upland metaverse to launch a series of Web3 apps and games ahead of the World Cup 2022 in Qatar. The Upland metaverse is linked to real-world geography such as the Lusail Stadium in Qatar and other real locations where World Cup games are being played.

Lastly, the foreign minister of Tuvalu told the COP27 climate summit that the small island-nation is looking to preserve its culture and history in the metaverse. Simon Kofe, the foreign minister of Tuvalu, said that no matter what happens to the country’s physical territory, which is under threat from climate change, the nation will preserve its customs and culture in the cloud.

Even as the bear market in crypto continues, the amount of building going on in the metaverse is something to behold. We’ll have to wait until December 2nd to see if “Metaverse“ becomes the Word of the Year from OUP. But considering the amount of activity we’ve seen in the space recently, we think there’s a good chance it will be.