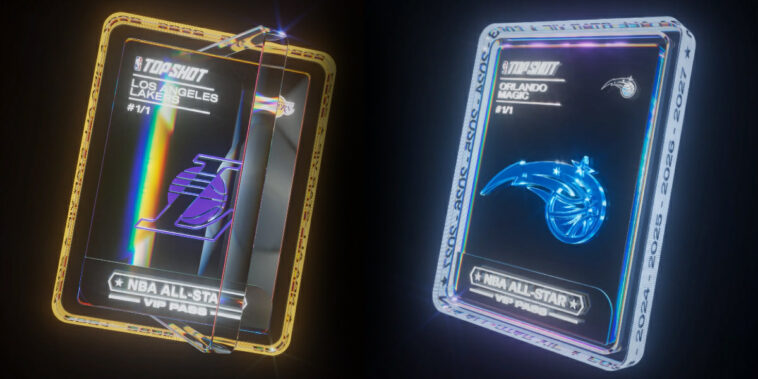 Anyone with an NBA Top Shot account should see the first auction appear on February 23rd at 8 PM EST. NBA Top Shot’s Dapper Labs will release one additional All-Star NFT auction per day until all 30 are on the platform. Basketball fans have seven days from the initial drop to bid on each of these NFTs.

According to an NBA press release, each of these NFTs will highlight one of the 30 teams in the NBA. But these NFTs are far more than cool digital collectibles. Token holders can use their NFT to enjoy VIP access to each All-Star Game between 2023 and 2027.

Anyone who wins one of these 30 NFT auctions will get two seats in the lower-bowl for five All-Star Games. These two seats include other All-Star-related events like Clorox Rising Stars and the Taco Bell Skills Challenge.

But the perks don’t stop there.

NFT holders will enjoy a backstage tour of each stadium, a picture on the home court, and the opportunity to shootaround with NBA legends. Plus, before fans leave this VIP All-Star event, they will get a bag stuffed with exclusive NBA swag.

Interestingly, this news comes shortly after the NBA said it would design a city-wide NFT gallery for 2022’s All-Star Game.

On top of the 30 auctioned All-Star NFTs, NBA Top Shot says it will hold a drawing on March 8th for one extra special NFT. Unlike the auctioned NFTs, this free All-Star NFT will commemorate the NBA. Whoever wins the giveaway NFT can use it for VIP access to the five upcoming All-Star games.

As long as people have an NBA Top Shot account between February 17th and February 21st, they will get one “shot” to win the free All-Star NFT. However, there are a few ways fans could stack the odds in their favor.

For instance, the NBA will reveal a QR code on February 20th during 2022’s NBA All-Star Game. Scanning this QR code will give people with an NBA Top Shot account five extra chances to win.