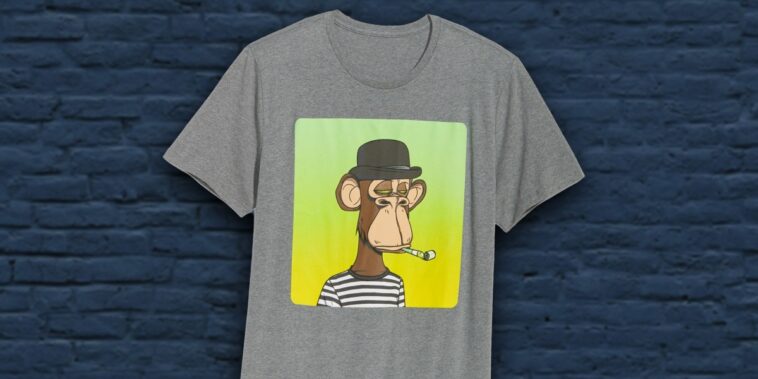 The American fashion retail giant Old Navy has hired the services of the Bored Ape Yacht Club to design a range of Bored Ape T-shirts featuring the company’s logo.

Old Navy has launched a T-shirt featuring the melancholy face of Bored Ape #7285 from the blue-chip NFT project. The T-shirt is available at Old Navy stores and the company’s website for $18.99 and is listed as “BAYC #7285 Gender-Neutral T-Shirt for Adults.” It will be on sale until January 31st, 2020.

While the right to reproduce an NFT’s likeness is typically reserved for its blockchain owner, Old Navy has licensed this particular Bored Ape to mass produce it on clothing.

Old Navy also has plans to expand their NFT clothing line with additional blue-chip NFTs, including a total of six Bored Apes, eleven Mutant Apes, one CryptoPunk, and six Clone X NFTs. The Web3 initiative is being done in collaboration with RTFKT, a virtual sneaker maker recently acquired by Nike.

Old Navy, which is owned and operated by Gap Inc., has several other popular intellectual property images available for licensing, including SpongeBob SquarePants and The Simpsons.

The move by Old Navy to emblazon the iconic Bored Ape onto a T-shirt is unique, but Old Navy certainly isn’t the only clothing retail store to take an interest in Web3. At Rarity Sniper, we’ve written about several brands and retailers jumping into Web3 and NFTs over the past year. Here are a few recent headlines:

Web3 and the metaverse are transforming the way companies can connect with customers, and clothing brands are taking full advantage.

Although the move from Old Navy isn’t happening on Web3 — the T-shirts can be purchased with debit or credit card and are not NFTs stored on the blockchain — the move will certainly bring more attention to the already wildly successful Bored Ape Yacht Club and non-fungible tokens in general.

Time will tell if Old Navy’s debut Bored Ape T-shirt will be successful. But given the popularity of Old Navy, we don’t think it will long before we start seeing some of these sad Ape T’s out in the wild.