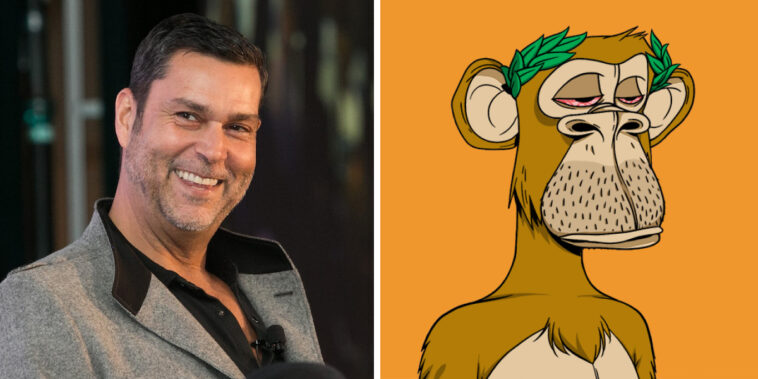 Former hedge fund manager at Goldman Sachs and the current CEO of Real Vision Raoul Pal recently bought Bored Ape #7894 for 140 ETH — or around $400,000 at the time of purchase.

Pal posted about the big buy on his Substack, where he explains he’s been following Bored Ape Yacht Club (BAYC) for some time now and goes over some of the recent successes of the collection.

Specifically, he mentions the popular NFT collection’s partnership with Adidas, being impressed by the founder of Yuga Labs, and an encounter with Timbaland, the world-class producer who’s created an NFT record label with four Bored Apes called Ape in Productions.

But what appears to have influenced Pal to pull the trigger and ape into BAYC was hearing the news of Yuga Labs buying CryptoPunks and Meebits and giving IP rights back to holders.

Pal says he chose his Ape, called Seneca, because of its clean and simple design, “the rare laurel wreath and its symbolism.” Ape #7849 is ranked 4670th in rarity in the 10,000-piece NFT collection. Its rarest trait is its Laurel Wreath, which only occurs 72 times in the collection.

Pal is an investment strategist, economist, and hedge fund manager prominent in the world of finance. He’s known for being one of the few investors to predict the mortgage crisis of 2008-2009.

He is also known for being bullish on crypto and a proponent of Bitcoin. He’s currently the CEO of Real Vision — a streaming service that aims to give users easy-to-understand financial information — which he co-founded in 2014.

Rarely a day goes by that we’re not writing about BAYC, one of the most successful generative NFT collections of all time. The PFP avatar collection launched by Yuga Labs in April 2021 has generated over $1.4 billion in total sales as of March 2022, and the floor price is currently 105 ETH, around $350,000.

And Pal is far from the only celebrity to spend on an Ape. Snoop Dogg, Eminem, Meek Mill, Paris Hilton, Jimmy Fallon, Kevin Hart, and Serena Williams are a few of the other big names that own Apes and are involved in the community.

A few weeks ago Yuga Labs released its cryptocurrency ApeCoin, which saw over 4,000% growth in the first week and was airdropped to BAYC holders. Just a day after the launch of ApeCoin, BAYC founder tweeted its first teaser trailer for a Bored Ape metaverse called the “Otherside,” which could launch in April of this year.

At present, BAYC is much more than a PFP NFT collection, and for holders of Apes, the cartoon JPEGs are more than a status symbol.

As competition for the metaverse stiffens, BAYC seems as likely as anyone to be a dominant player in the space. 2022 has already been a monster year for Yuga Labs and we’re just finishing up Q1. We’ll certainly be keeping our eye out for more to come.