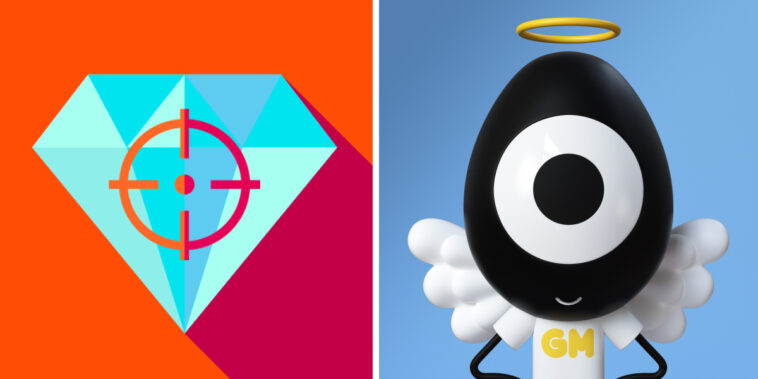 Dour Darcels is a 10,000 NFT collection that features black, spindly-legged creatures with round bodies and single large eyes. Despite launching during a quasi bear market for NFTs, the team has generated enough interest to position the collection above a 0.5 ETH floor, which is remarkable as many collections have faltered during this time.

We sat down with Craig Redman, the founder and lead artist of the collection, to get the scoop on all things Dour Darcels — the history behind the collection, the roadmap, the team’s organizational philosophy, and most important of all, how the team will bring value to the holders of the NFTs.

First, could you talk about the Darcel Disappoints character?

Redman moved to New York by way of Australia in 2007 and quickly found out that the city was not like it was portrayed in the movies. Then he had the idea of documenting this “new life of mine,” but because he had a background in design and illustration, he decided to create a full-blown character to represent him. This was Darcel Disappoints, a thin-legged, round-bodied, one-eyed creature that told stories about life in the big city.

Many of the stories were fairly mundane — getting lonely, going to a big art opening, getting drunk. And some of them, admittedly, were stupid (Redman says laughing), but the character took off. Redman believes that people found Darcel Disappoints relatable.

When and why did you decide to take this from a one-character show to an entire collection?

Redman first realized he could expand Darcel’s universe in 2012 when he created an exhibition at the famous Colette store in Paris. It was a famous store, and Redman considered himself lucky to work on projects there. They had the exhibition on the 15th anniversary of the store and filled the space with 150 Darcel portraits based on famous people. Two of the subjects were Andy Warhol and Kayne West.

It was Redman’s first utilization of a common NFT collection method — varying traits. To create the 150 portraits, Redman varied hairstyles, accessories, and other traits to create differences between the Darcel portraits. Then, something magical happened at the exhibition:

People would stand next to the Darcel that best “represented them” and take pictures. Later, they’d go to the Darcel Disappoints website and download photos, using them as PFPs on social networks.

When Redman first launched into NFTs, he thought, “I’ve been doing this for years.” Instead of hand-drawing 150 portraits, he’d be creating 10,000 custom avatars with digital certifications — a proper NFT collection.

Could you talk a bit about your roadmap?

The M.O. for Redman and his team at Dour Darcels is “underpromise and overdeliver.” He doesn’t want to make any crazy promises, especially promises that are impossible to execute, and he is big about meshing IRL utility with the NFT collection.

One example is the partnership between Dour Darcels and Colette, resulting in 25 1/1 NFT PFPs dropped just weeks after the official collection’s launch. He views the Dour Darcels collection as an opportunity to onboard other Web2 companies into Web3, and he comes with existing partnerships like Colette’s, Coca-Cola, and the New York Times.

In Redman’s view, these established partnerships are a unique feature of Dour Darcels. He has a preexisting world of contacts in the Web2 and business world, different from NFT collections starting from scratch.

What do you want your holders to most get out of purchasing a Dour Darcels NFT?

The original Darcel Disappoints was relatable to people — being disappointed by the little moments in life, having a little pessimism, fun and funny but not super happy and optimistic all the time.

According to Redman, the challenge in Web3 is creating your own and having that difference, whether it’s aesthetics or mood.

Redman gives the story of the couple who found matching Dour Darcels, then posted a picture of their Darcels next to each other. Already, a community is forming around the collection, creating memes on its initiative.

What are some ideas for IRL utilities you plan on adding to the NFTs?

Redman has two main initiatives when it comes to IRL utilities, although this focus could widen in time. The first is best represented in the Colette-Dour Darcels drop. As part of it, the winners of the 25 1/1 Darcels will receive custom phone cases with their token holders’ names and a QR code linking to Etherscan on the back. This arrangement highlights some of the best of Web3 with its provenance, evidence, and personalization and the IRL utility of Web2.

Second, Redman hopes to put up events where collectors can connect and network in real life. As Redman puts it, these will be events where “the community comes together.”

Do you plan on entering the metaverse and, if so, how?

Redman laughs and notes that while they are thinking about it — to give six months down the road as an example — the collection only minted a few weeks. In his view, it’s like asking, “When’s the feature-length movie coming out?”

Now, about the team. How big are y’all?

For Redman, his team has a magical setup at the moment. There are between eight and 12 of them, a mix of marketing people, consultants, moderators, and long-time developers. West Coast NFT, a company that has worked with top non-fungible token projects Doodles and mfers, is also an integral part and helped a great deal with the minting process.

What is a typical workday like for a Dour Darcels team member?

The Dour Darcels project is all-consuming at the moment, and he remarks that “there is no space for anything else in your life.” Sometimes, he wakes up and checks Discord in the middle of the night to make sure everything is okay.

But while he is used to the grind, having run Darcel Disappoints as a one-man-show for years, the key difference now is the community. As Redman notes, they are “an amazing, supportive group of people.”

What are your biggest aspirations for this collection?

Some more immediate aspirations for the Dour Darcels team include having a weekly space for three months, doing giveaways from the community treasury, and planning for events.

But the real goal for Dour Darcels and its team is longevity, which Redman calls the “trickiest thing to do in Web3.” He wants to create a long-term project that benefits all the holders, which means making the right decisions about utilities, not rushing things out, and matching the ethos of the project and of Web3.

Redman doesn’t want Dour Darcels to be a flash in the pan and gone in a couple of months. Creating this world of the Dour Darcels is important to him.

Finally, is there a sneak peek you’d like to share or something exclusive for the Rarity Sniper community?

Redman says he’d have to share that information with his Discord community first.

*Disclaimer: The Sniper Spotlight is a series where we take a closer look at unique and intriguing non-fungible token collections. Nothing in the article constitutes financial advice, investment tips, or promises of financial gain or loss. As always, remember to do your own research and degen responsibly.