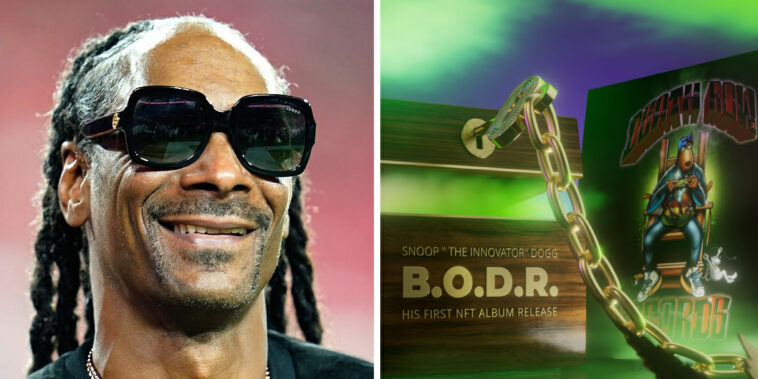 The collection will jumpstart Gala Music, which aims to transform music streaming through blockchain technology and non-fungible tokens, giving more power and options to artists and fans alike.

Snoop Dogg’s album appears to be the first major collection drop and ownership of a track comes at a cost — around $5,000 in Gala’s native token. While it sounds steep, for hip-hop heads, NFTs fans, and collectors, the price could be well worth it.

The string of features on the 17-track album including Wiz Khalifa, October London, The Game, Da Baby, Nate Dogg, and Nas is enough to excite hip-hop heads in itself, but owning a B.O.D.R. Stash box also comes with additional perks.

Here are some of the details about Snoop’s latest album B.O.D.R from Gala Music:

Another level of exclusivity will be unlocked for the Snoop Dogg and NFT fanatics who collect all 17 tracks, which Gala states will likely need to be done through a combination of minting and trading on secondary markets.

Possess the B.O.D.R. album in its entirety and expect small audience live concerts, Death Row bling, and the chance to party with Snoop himself at his L.A. mansion.

Gala Music brands itself as the “first decentralized record company” that aims to empower artists and fans through blockchain technology to create a new music experience.

Ownership of music NFTs from Gala Music have interoperability and can be used as in-game items in the Gala Games ecosystem — which has over 1.3 active million users. According to their webpage, fans will have the ability to listen and earn rewards and artists will have ownership and more generous royalties paid in crypto.

Snoop Dogg, a pioneer of rap, has not been shy about his passion for NFTs and the metaverse. He owns digital land in the popular metaverse Decentraland as well as a Bored Ape Yacht Club NFT.

It should come as little surprise that Snoop would link NFTs directly to his music and doing it with Gala Games seems like a good idea. After all, who else would you rather listen to when cruising around the metaverse than the “Doggfather” of rap?