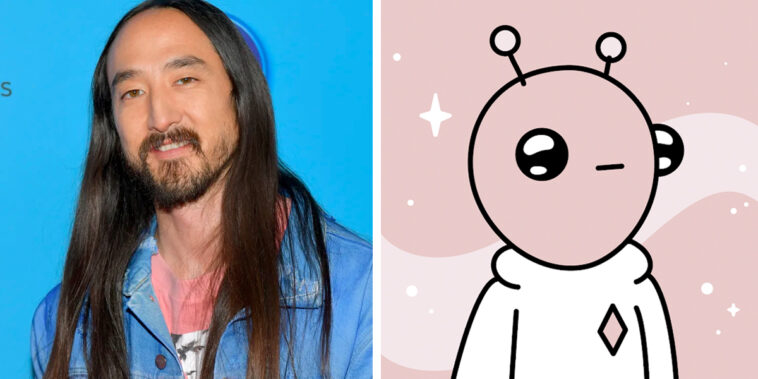 Even at a time when celebrities and artists appear to be buying non-fungible tokens (NFTs) on the daily, the purchase this Friday of Doodle #2238 by megastar DJ and NFT investor Steve Aoki for a staggering 269.69 ETH ($947,000) made waves on NFT Twitter and beyond.

Shortly after making the purchase, Aoki changed his profile picture on Twitter to the adorable pink alien Doodle NFT and tweeted, “Just purchased the 9th rarest @doodles in existence! There are only 10 alien type doodles ever created and I own one of them now! Welcome #2238 to the family!”

As one would expect, Doodle holders and fans were excited to see the star join their ranks, and the floor price of the collection reflected their enthusiasm. In fact, the Doodles’ floor price is up over 60% this week at 10.47 ETH, around $31,900 — although it shouldn’t be attributed to Aoki alone.

He has had help from other celebrities who own Doodles NFTs, such as rap legend Snoop Dogg, who’s invested heavily in the NFT space and Metaverse. Also, the owner of the most NFTs in the world, Pranksy, recently bought a rare golden Doodle for 296.69 ETH, about $1.1 million, and has over 70 Doodles in his collection.

Doodles NFT collection is a generative NFT collection by artist Burnt Toast on the Ethereum blockchain. The collection consists of 10,000 Doodles with happy, funky colors and a variety of characteristics and traits that fluctuate in rarity.

It was launched in October of 2021 by Evan Keast, Scott Martin, and Jordan Castro, a team that previously worked together on projects at WhatsApp, CryptoKitties, Google, and Snapchat.

Beyond ownership of the digital art, Doodle holders gain participation into a vibrant community and have a say in how the community treasury, as well as other different campaigns, activations, and events, are coordinated. There are also in-person meetups and parties hosted by the Doodle community for members.

The purchase of the Doodle should come as no surprise to fans of Aoki and Doodles NFTs. Aoki has bought into other prestigious collections such as Bored Apes, Bōryoku Dragonz, and SolanaMonkeyBusiness, among others.

The multitalented DJ, producer, music programmer, and record executive has even teamed up with actor Todd McFarlane to launch an NFT Marketplace that aims to empower digital artists, musicians, and creators.

On a recent NFT music track collaboration with 3LAU, the duo raised $1 million and Aoki used it to purchase Bored Ape #4190. You can check out some of Aoki’s NFT projects on Nifty Gateway, including his debut NFT collection, Dream Catcher, a collaboration with the visual artist Antonio Tudisco, which has done over $4 million in sales.
.