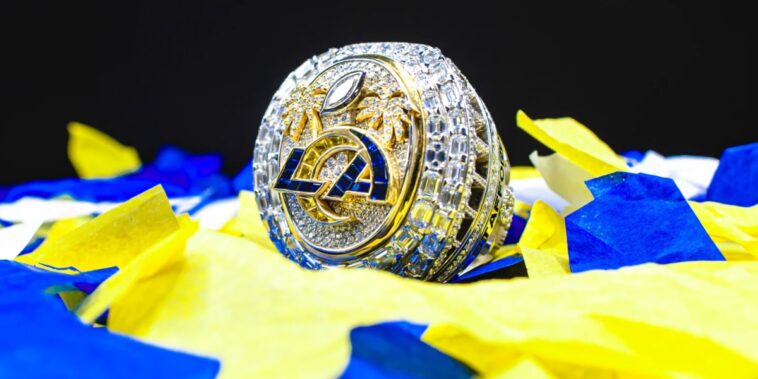 The Los Angeles Rams just became the first NFL team to partner with Dapper Labs on Team NFTs for the 2022-2023 season. The news, which was announced on Tuesday, is being kicked off with an exclusive non-fungible token (NFT) collection commemorating the Rams’ 2021 Super Bowl ring.

The Super Bowl LVI Ring NFTs were designed based on the real-life rings that players, coaches, and staff received for their exhilarating 23-20 victory against the Cincinnati Bengals in last year’s Super Bowl.

The news marks Dapper Labs — the Web3 company behind NFL All Day and a pioneer in digital sports collectibles and moments — first season-long partnership with an NFL team.

Beginning Thursday, August 11th, at 10 a.m. PT, the NFTs will be available on NFL All Day. There will be three tiers of NFTs, and though the prices start as low as $9, there is a limited number of each. The tiers include:

Dapper Labs is well known for its role in pioneering NFTs and digital collectibles in sports. They have partnerships with the NBA, WNBA, NFL, LaLiga, the UFC, and others. The Rams, coming off a thrilling Super Bowl victory in February, are ranked fourth according to their roster by ESPN coming into the 2022-2023 season.

Fans can access the NFT launch at Rams.NflAllDay.com. Because of the limited number of NFTs available, fans will have to sign up to have a chance to mint.

The NFL and Dapper Labs Innovate in Web3

The Rams are the first team to partner with Dapper Labs for Team NFTs for the upcoming season, but the rollout of Web3 technology by the NFL has been slow and steady ever since it inked its deal with Dapper Labs in 2021 to bring NFL moments onto the blockchain.

With the launch of NFL All Day, an NFT marketplace by Dapper Labs and the NFL, fans can trade digital collectibles of their favorite NFL moments. Similar to traditional collectible trading cards, fans can buy packs of digital moments that feature some of the best plays in football.

And besides the NFT marketplace, the NFL and some of its teams experimented with NFTs in other ways last season. For example, the NFL and the Cincinnati Bengals released a limited edition NFT collection to commemorate the team’s historic playoff run, and free NFTs were given to attendees of the Super Bowl.

Most recently, the NFL announced it would mint NFT ticket stubs this season on Flow — the blockchain of Dapper Labs. All teams must offer NFT ticket stubs for at least three home games during the 2022-2023 season.

Although the NFL wasn’t as quick as the NBA to jump into Web3, it now appears to be pushing full steam ahead. We’ll be keeping our eyes out for news of the Super Bowl LVI Rings and for more teams collaborating with Dapper Labs for the upcoming season.