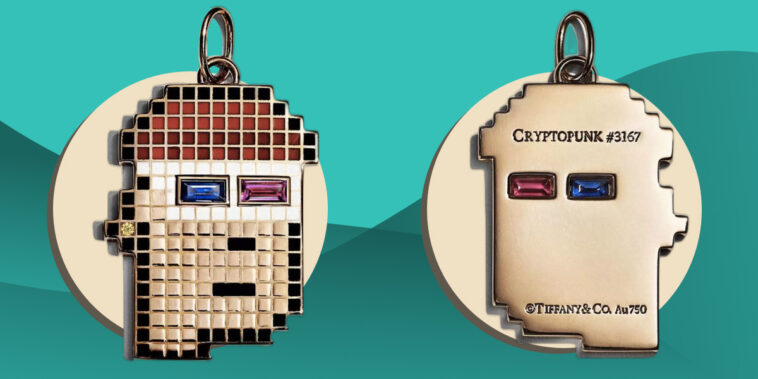 On April 7th, Tiffany’s vice president Alexandre Arnault revealed a custom-made pendant modeled on CryptoPunk #3167. This NFT-inspired item comes complete with the official “Tiffany & Co.” logo and the engraving “CryptoPunk #3167” on the back.

According to Arnault’s Twitter feed, Tiffany designers used a base of rose gold and enamel to create this high-end CryptoPunk product. Arnault also said his priceless pendant has a ruby and sapphire to re-create CryptoPunk #3167’s 3D glasses. For a final flourish, Tiffany & Co. added a diamond to mimic the earring in the CryptoPunk #3167 NFT.

The day after Arnault unveiled his CryptoPunk #3167 pendant, he posted a few additional pictures of the design and creation process. Arnault also asked Twitter whether Tiffany & Co. should make similar CryptoPunk pendants for those in the CryptoPunk community.

According to the Twitter poll results, 80 percent of respondents would be interested in buying jewelry based on their CryptoPunk NFT. However, there’s no official word on whether Tiffany & Co. will roll out official CryptoPunks pendants. Also, Arnault said Tiffany & Co. probably wouldn’t design all 10,000 NFTs in the CryptoPunks collection.

On April 1st, Tiffany said it was working on a cryptocurrency called “TiffCoin.” However, since Tiffany released this news on April Fool’s Day, it wasn’t being totally honest with its fans. Following the April 1st announcement, Tiffany revealed it would sell 499 literal gold “TiffCoins” on April 2nd for $9,999 each.

By the way, if “Tom Sachs Rocket” sounds familiar, you may remember Budweiser also bought one of these NFTs. In the summer of 2021, Budweiser changed its Twitter profile after purchasing its “Life of the Party” NFT for $25,000.