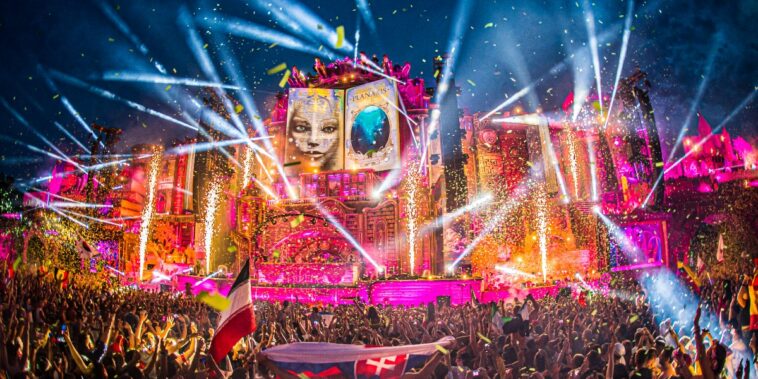 Tomorrowland, a site for dance music fans around the world, will be hosting their first-ever performance by an NFT music artist.

Ape Rave Club (ARC) will be performing during the second weekend of the event, July 22nd-24th, on Tomorrowland’s biggest stage of all, the Mainstage.

ARC, an artist that is part of the Bored Ape Yacht Club (BAYC) community, will be performing their digital-come-real world immersive set to an audience of 600,000+ people.

Other major artists set to perform include NFT enthusiast Steve Aoki, and other big names in the dance music scene including Martin Garriz, Alesso, Tiesto, Marshmello, and Armin van Buuren.

For the show, ARC will be distributing crypto tokens to their fans, which will give them the chance to vote on important decisions throughout ARC’s music journey. This move vibes with the ethos of Web3 and blockchain technology, granting power to communities and artists and taking it away from traditional record labels.

Currently, the music that will be featured in ARC’s performance remains unknown. However, the NFT artist will be releasing fan-influenced content on traditional streaming services in line with the event.

Will NFTs take over music?

ARC isn’t the only musician who’s betting on the metaverse and NFT technologies. Steve Aoki, who will also be performing at Tomorrowland, claims he’s made more money in one year from non-fungible tokens (NFTs) than in a decade of streaming royalties.

Snoop Dogg, who has become one of the leaders in the NFT and cryptocurrency space, has released numerous NFT projects recently and has pledged to turn Death Row Records, a historic west coast hip-hop label, into an NFT label.

His latest studio album Bacc on Death Row (B.O.D.R.) was released in February in a partnership with Gala Music as an NFT album. So far B.O.D.R. has done nearly $45 million in sales.

One of the reasons NFTs are becoming popular in the music industry is because the technology helps to bring control back to the artists, allowing them to retain ownership over their work and lifelong royalties from secondary sales. In an industry notorious for taking advantage of musicians and giving them raw deals, NFTs look like they could empower artists and record labels in ways like never before.

We’ll be keeping our eye out for more exciting music projects in the NFT space, and we’re sure there will be many more to come.