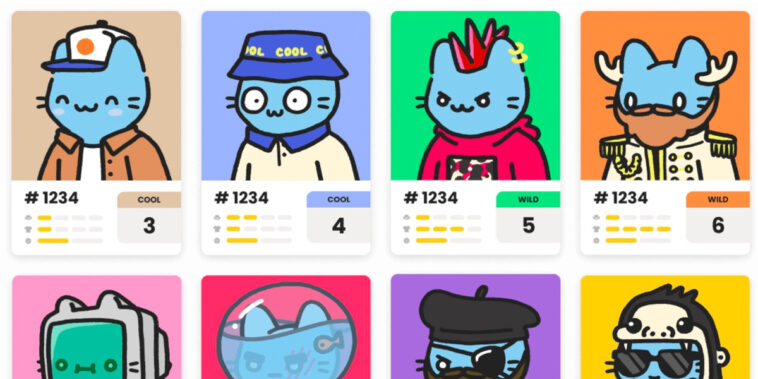 Saying that NFT crypto art exploded in the summer of 2021 would be an understatement. The number of game-changing NFT art projects that launched between June and August was so extraordinary that it’s now known as “The Summer of NFTs.”

Among the projects that were released, few generative NFT collections have proved to be as valuable, adorable, and straight-up cool as Cool Cats.

Cool Cats, released in July of 2021,  is a curated collection of 9,999 randomly generated NFTs minted on the Ethereum blockchain that has risen to become one of the top NFT collections in the world, earning a seat alongside major players like CryptoPunks and Bored Ape Yacht Club.

Founded by four friends with a love of crypto, digital art, and of course, cats, Cool Cat NFTs have been bought by celebrities, featured on major news outlets, and sold for hundreds of thousands and even millions of dollars.

But what exactly are Cool Cat NFTs? How did the collection become so popular? And how can you get involved in the project? These are just a few of the questions we’ll be answering in the upcoming blog. Whether you’re new to the NFT space or you’re an OG brushing up on NFT history, Cool Cats is a pivotal NFT collection to know and understand.

The History of Cool Cats

On July 1st, 2021, the first generation of Cool Cats was released, consisting of 9,999 randomly generated non-fungible tokens of adorable cat drawings stored on the Ethereum blockchain. The original minting price was .06 ETH, which was between $125 and $150 at the time.

At first, the Cats were slow to take off, and only 360 NFTs were sold. However, the founders listened to their community members who were looking for a project to buy into at a cheaper price and quickly slashed the minting price to .02 ETH, or around $50.

After the adjustment, the remaining Cool Cat NFTs sold out within hours. As a sign of good faith, the team even refunded .04 ETH to the 360 initial buyers who bought in at the original price.

This decision to change the minting price paid off big time for Cool Cats, and it exemplified the founders’ ethos of paying attention to and caring about their community.

Within a week of launch, the floor price (the lowest price you could buy into the collection) reached one ETH and by the end of August 2021, the average selling price on secondary markets was 6.5 ETH. In September 2021, the floor price reached an all-time high of 14.5 ETH.

Today, the lowest price you can buy a Cool Cat NFT on OpenSea is 7.99 ETH (or around $32,000), the collection has done over 62.9K in total sales volume, and Cool Cat NFTs have been traded over 20,000 times on secondary markets.

In October of 2021, an extremely rare Cool Cat sold for 320 ETH (over a million dollars), marking the collection’s biggest sale to date.

In a short time frame of about six months, Cool Cats positioned itself as one of the major players in the NFT space, and according to their roadmap, the founders have many more plans in place to increase the value and utility of holding a Cool Cat NFT.

The Cool Cats team is a group of four relatively unknown creators who describe themselves as follows: “We’re a team of four nerds who are passionate about crypto, art and makin’ cool stuff.”

The team consists of:

From the beginning, the creators of Cool Cats understood the importance of building a strong community. Their goal was to create a family-friendly NFT collection that was unique, accessible to anyone, contained utility, and had great digital artwork – and they succeeded in doing just that.

What inspired the Cool Cats collection?

Cool Cats is an original NFT, but there’s no doubt the founders were inspired by other generative art collections and borrowed some of the elements that made those collections successful. CryptoPunks (2017) and Bored Ape Yacht Club (April 2021) are two of the collections that likely inspired Cool Cats.

Listed below are some features that helped make Cool Cats the success it is today:

Cool Cats also borrowed from popular culture. The phrase “cool cat” can be traced back to the 1940s, when it was used to describe people who appreciated American jazz music. Lastly, human beings’ fascination with cats dates back to ancient Egypt, and there was even a Looney Tune character called “Cool Cat.”

In other words, people have always loved and appreciated cats, something the creators of Cool Cats considered before releasing their transformative NFT collection.

Generative art NFT collections rely heavily on different traits and attributes appearing randomly throughout the collection. That is because when you receive an NFT that has a rare mix of traits, the NFT will be ranked higher in the collection, which creates value for that particular NFT.

The first generation of Cool Cats was randomly assembled from 100 traits that could be combined to make 300,000 possible combinations of unique Faces, Hats, Outfits, and Bodies.

One thing that differentiated Cool Cats from other NFT collections from the beginning was how the Cats are ranked. All Cool Cats are worth between three and ten points, with ten being the rarest. The cats are classified into four groups: Cool, Wild, Classy, and Exotic.

Common items such as a Hat or Beenie are worth fewer points than rarer items like an Ape Outfit or Computer Head. Although all Cool Cats are cool, some are admittedly cooler than others.

Listed below is the Cool Cats ranking system:

The Exotic Cool Cats are the rarest and therefore the most valuable and sought after. The points can be used to participate in contests and raffles put on by the Cool Cats team and will also be important for breeding the next generation of Cool Cats, a feature that is anticipated to be arriving soon.

Here are some other stats about Cool Cats:

To get a better idea of how Cool Cats are ranked in rarity, you can visit Rarity Sniper Cool Cats breakdown and see how each NFT in the collection is ranked.

Cool Cats launched at a time when the NFT market was flooded with new projects, and on release, it looked like the project might get drowned out by all the noise. However, once the minting price was lowered, Cool Cats began to take off and has never looked back.

Listed below are some of the elements that make Cool Cats so special:

From the beginning, the Cool Cats’ team has found ways to bring community members together. They’ve also always had the goal of collaborating with other brands and creating a Cool Cats ecosystem that can provide members with a place to interact, grow, and be rewarded for their participation in the community.

The Success and Top Sales of Cool Cats

Many people consider Cool Cats to be a “blue chip” NFT in its early stages of development. As Cool Cats plans for the future and their second generation of NFTs, it will be interesting to see if the floor price continues to rise and what kind of sales numbers the collection produces.

In the meantime, let’s look at the top five Cool Cat sales of all time:

On October 5th, 2021, Cool Cat #1490 sold for 320 ETH ($1,091,139). The Cat is classified as Exotic with 10 points. It is a Zombie and one of nine unique Cool Cats with no generative art traits. Interestingly, the seller used the money from the sale to start an animal shelter called “Cool Animals.” The Cat is currently on sale for 850 ETH.

While these remain the top sales to date, there have been several other sales that exceed $200,000. Over 23,000 Cats have been sold on secondary markets and the collection has generated a whopping $195,758,133 in total sales volume at the time of writing.

Cool Cat Collaborations and Celebrities with a Cool Cat

In August of 2021, Cool Cats collaborated with TIME Magazine by creating 400 new NFTs with four different designs; all of the cats are depicted reading TIME. The idea came from TIME president Keith Grossman, who tweeted that he pursued the collaboration with Cool Cats because:

The four hundred NFTs were awarded to eight winners of a Cool Cat meme competition, and the remaining 392 were auctioned off to Cool Cat holders. The collaboration with the media giant brought more attention to Cool Cats and increased the utility and value for members who held Cats.

Another boost for Cool Cats came on July 9th, when Mike Tyson made his profile picture a Cool Cat, garnering nearly 9,000 likes and 1,800 retweets.

If you’re interested in the Cool Cats NFT collection but the floor price is too high to buy into, there are several generative NFT projects with similar themes and concepts.

Although these collections have not seen the same meteoric rise that the Cool Cats collection has enjoyed, they may be a good option for folks looking to get involved with similar cat-themed NFT collections.

Listed below are a few NFT collections that might be worth giving a look:

Every day, hundreds of new NFT collections are released, and who knows, if you get lucky maybe you’ll discover the next Cool Cats blue-chip NFT. The best way to find upcoming NFT collections is by visiting one of the many sites that rank NFTs and feature upcoming collections.

How To Get Involved with Cool Cats

Because the floor price of Cool Cats is so high, not everyone can buy into the collection at this point. However, there are still several ways to get involved with the project.

One way is to join the active Cool Cat Discord community, as well as follow Cool Cats on Twitter. By doing so, you can hear about upcoming events and any new projects that might be released from the creators of Cool Cats in the future.

How to Purchase a Cool Cats NFT

Because Cool Cats NFTs sold out on launch, they are now only available for purchase on secondary markets. OpenSea and Rarible are two open NFT marketplaces where you can find Cool Cats for sale.

However, since purchasing a Cool Cat is such a big investment, make sure you take the time to review the rarity of the Cat you purchase and only risk money you are willing to lose.