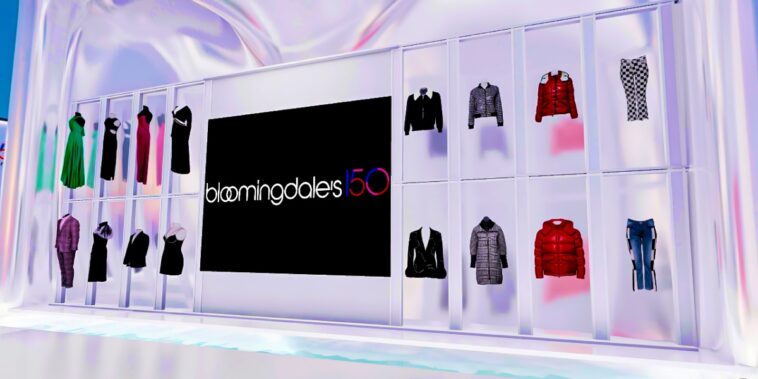 The interactive virtual store will include an interactive 40 Carrots frozen yogurt experience, 360-degree views of luxury products, and other surprises. It will initially feature collections from brands including Baccarat, Byredo, David Yurman, Polo Ralph Lauren, and more.

Emperia is a Web3 platform that creates virtual immersive experiences for brands and companies. Other brands the company has worked with include Dior, Burberry, Harrods, and Christie’s.

He added that he believed the retail industry was moving in the direction of the metaverse and Web3, and that the possibilities of the virtual store were “endless.”

The Fashion Industry Takes to Web3

Bloomingdale’s may be the most known department store to enter the metaverse, but it certainly isn’t alone. At Rarity Sniper, hardly a week goes by that we don’t report on another fashion brand entering the metaverse. Here are some of our top stories about fashion in Web3.

Also gearing up for New York Fashion Week, PUMA unveiled a Web3 portal that will let users redeem NFTs for IRL sneakers. The portal is called Black Station and will be an interactive space that takes users through a digital adaptation of Fashion Week where they can interact with the show’s pieces. Black Station went live on September 7th.

Next, American fashion brand Tommy Hilfiger has scheduled an NYFW event for September 11th at the Skyline Drive-In in Brooklyn that will be streamed on Roblox. The event will feature avatars in the metaverse decked out in Hilfiger’s Fall 2022 styles while taking over a “remixed virtual city of New York.”

Lastly, Old Navy recently hired the services of the Bored Ape Yacht Club to design a range of Bored Ape T-shirts. The first launch depicts the sad face of Bored Ape #7285, and is available for $18.99.

It will take time to see if Bloomingdale’s metaverse store will be a success. But one thing is certain: the metaverse is evolving and transforming the way traditional stores do business.