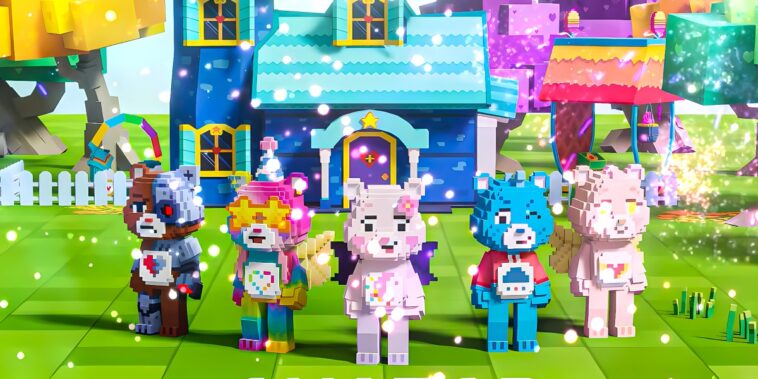 The Care Bears are coming to the metaverse and bringing their tiny, adorable perspective with them. The “Care Bear Avatars“ NFT collection is now available in The Sandbox metaverse, and can be used in-game to complete quests, play games, and earn the metaverse’s native cryptocurrency $SAND.

The allowlist mint for The Care Bears Avatars began on November 14th, 2022, with the public sale taking place the following day. The mint sold out, and the NFTs must now be purchased on secondary marketplaces like OpenSea.

Here’s what we know about the Care Bears Avatars:

The Care Bears are an iconic 80’s and 90’s characters that appeared in TV shows, books, films, and video games. They were originally painted by Elena Kucharik in 1981 and used in creating cards.

This isn’t the Care Bears Franchise’s first foray into Web3. In September 2022, Care Bears announced its partnership with The Sandbox and shortly after released its first NFT collection. The current floor price for a Care Bears Avatars on OpenSea is .04 ETH.

The new NFT collection from Care Bears should give fans of the adorable characters reason to celebrate. But Care Bears isn’t the only brand looking to expand its reach in Web3. Despite the bear market, we’ve seen several NFT collections released in recent months. Here are some of our top stories.

First, the American teddy bear retailer Build-A-Bear celebrated its 25th Anniversary with the launch of its first NFT collectible. The winner of the one-of-a-kind NFT and physical teddy bear also received a trip to the brand’s 25th Anniversary party in its hometown St. Louis.

Next, the wildly popular HBO series “Game of Thrones” announced it would be launching its first NFT collection before the end of the year. The “Game of Thrones: Build Your Realm” NFTs will allow holders to engage in thematic activities and challenges and collect assorted packs to strengthen their characters.

Lastly, yesterday Adidas announced its first NFT collection of digital wearables. The “Virtual Gear” NFTs will be compatible with different PFP avatars and across several metaverses. They were airdropped to holders of Adidas’ Phase 2 “Capsule“ NFTs.

Even as crypto and the NFT market wade through tough times, brands are investing time and money in Web3 technologies like NFTs and the metaverse. We’ll have to wait to see what fans think about the new Care Bear Avatar NFTs, but the move shows the partnership between Care Bears and The Sandbox is certainly evolving.