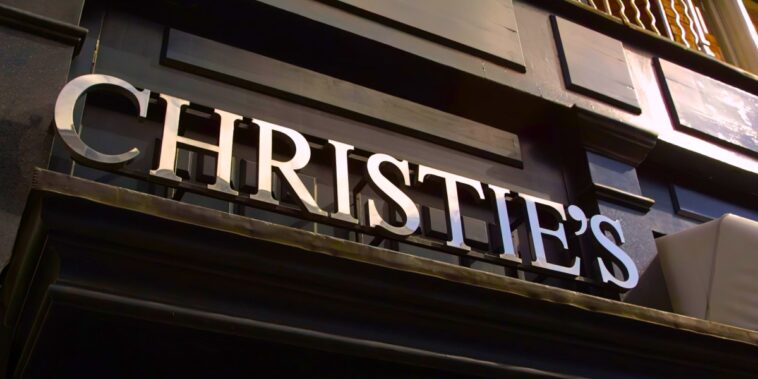 Though Christie’s has made Web3 headlines in the past auctioning off blue chip NFTs and 1:1 digital art for enormous sums, prior to Christie’s 3.0, payments were made offline or through a third-party site like MakersPlace. Now that Christie’s has its own NFT marketplace, buyers can purchase NFTs in ETH and transactions are recorded on the public Ethereum blockchain — similar to how the OpenSea and Rarible NFT marketplaces work.

The announcement came with the launch of an inaugural project by the artist Diana Sinclair, featuring nine digital art NFTs viewable in a virtual gallery developed by Spatial. The opening bids start at four and five ETH, respectively.

Christie’s is no stranger to Web3. In March 2021, the auction house shocked the art world when it sold Beeple’s “Everydays: The First 5000 Days,” for a whopping $69.3 million. Then a few months later, it facilitated the sale of nine CryptoPunks for nearly $17 million. Since then, Christie’s and its rival auction house Sotheby’s have taken a keen interest in Web3 and NFT technology.

One reason the NFT sales from Christie’s in 2021 were so shocking was because at the time the art world wasn’t sure if digital art could have value. Now that the question’s been answered many times over, not just auction houses but also traditional art museums and galleries are leveraging blockchain and NFT technology to reach new customers and art lovers.

At Rarity Sniper, we’ve written several headlines about the crossover between the art world and Web3. Here are the top stories about art in Web3 this year:

One reason galleries, auction houses, and museums have leaned into Web3 technologies like the metaverse and NFTs is because virtual galleries allow artwork to be seen, enjoyed, and purchased by people anywhere in the world with an internet connection. This opens a wider window of potential visitors and customers — which was especially important during the pandemic years when most of these institutions had to close their doors.

With the launch of its new NFT marketplace and an NFT drop by a talented young artist, Christie’s is continuing to show that, despite its years, it’s not afraid to innovate and change. We’ll be keeping our eye out for any new Web3 projects and NFT drops from the historic auction house.