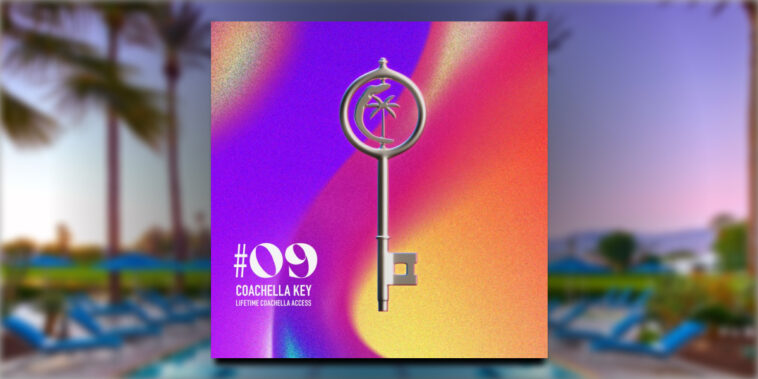 Coachella is partnering with FTX cryptocurrency exchange to auction ten lifetime passes to the popular music and arts festival in the form of non-fungible tokens (NFTs).

The exclusive, one-of-one NFTs are being called the “Coachella Keys Collection” and owning them comes with a variety of perks beyond the lifetime pass.

Ahead of the move, Coachella’s innovation lead Sam Schoonover said, “Only blockchain technology can give us the unique ability to offer tradeable lifetime passes to Coachella for the first time ever.” He added, “We wanted to take it one step further and use NFTs to enable ownership of experiences in the real world, too.”

As more brands and companies experiment with blockchain technology, it’s not surprising that Coachella would look to take advantage of the nascent technology that enables the authentication and storage of digital assets.

Owners of the Coachella’s Keys Collection will be granted some of the following privileges:

Each Key is distinct and provides individual perks that can be viewed on Coachella’s NFT Marketplace, which is built on the Solana blockchain. The Keys can be bought, sold, and traded — but owners of the NFTs must verify them by April 1st to unlock the yearly rewards.

In addition, Coachella is selling two other NFT collections on their NFT marketplace — the “Sights and Sounds Collection” and the “Desert Reflections Collection.” The first, priced at $60, is made up of 10,000 NFTs that can be redeemed for a print of an iconic festival photo. The latter consists of 1,000 NFTs iconic festival posters from Emek, which are redeemable for physical copies as well at $180 per NFT.

The auction will go live on Coachella’s NFT marketplace this Friday, February 4th at 10 a.m. Pacific time A portion of the proceeds from the sale will be donated to GiveDirectly, Lideres Campesinas, and Find Food Bank.