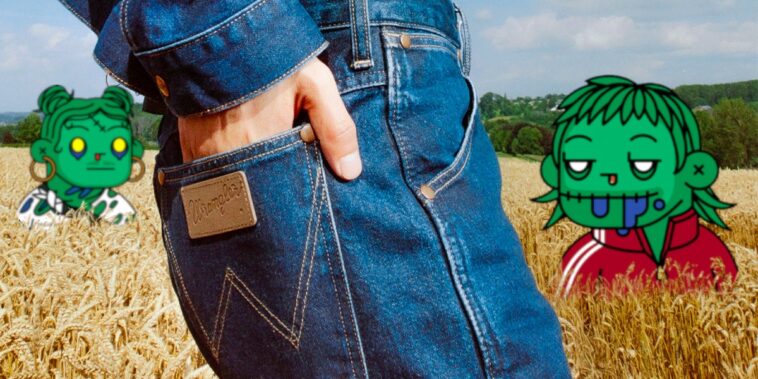 The American denim fashion brand Wrangler is partnering with top non-fungible token (NFT) collection Deadfellaz. The partnership was announced via a Tweet earlier in the week from Deadfellaz that was then retweeted by the official Wrangler Jean’s account.

To jumpstart the collaboration, Deadfellaz also revealed that they’d be hosting a competition. The competition will let Deadfellaz holders and fans work together for the chance to win both digital and physical prizes. Details about the prizes have not been released, but one could guess a pair of Wrangler jeans could be in the mix.

Deadfellaz is a collection of 10,000 “undead” NFTs on the Ethereum blockchain. The gender-neutral NFT project launched in August 2021, and has since risen in popularity among NFT fans, including celebrity entrepreneur Gary Vee — who owns at least one NFT from the collection. At the time of writing, the floor price of a Deadfellaz NFT on OpenSea is .65 ETH, or around $1,100.

The move from Wrangler to partner with Deadfellaz isn’t the brand’s first foray into the NFT space. Earlier in the year, Wrangler dropped its first NFT collection titled “Mr. Wrangler.” The project was launched on the NFT marketplace LTD.INC with the help of Grammy award winning musician Leon Bridges.

We’ve seen all sorts of companies and brands invest in NFT projects, blockchain technology, and the metaverse. But perhaps no more so than in fashion. At Rarity Sniper, we’ve covered several fashion brands entering Web3 over the past couple of months, and with the news from Wrangler, it looks like the enthusiasm in the industry is only picking up.

Here are some of the top headlines from Rarity Sniper about fashion and clothing brands in Web3:

Because NFT technology opens the door for virtual fashion and the metaverse provides a space for avatars to show off their digital gear, fashion brands have been embracing Web3 technologies more as time goes on and the technologies prove they are here to stay.

It will take time to see what kind of projects Deadfellaz and Wrangler create from their new partnership. But for folks who’ve been paying attention to Web3 news, another collaboration from a traditional fashion brand with a rising NFT collection should come as little surprise.