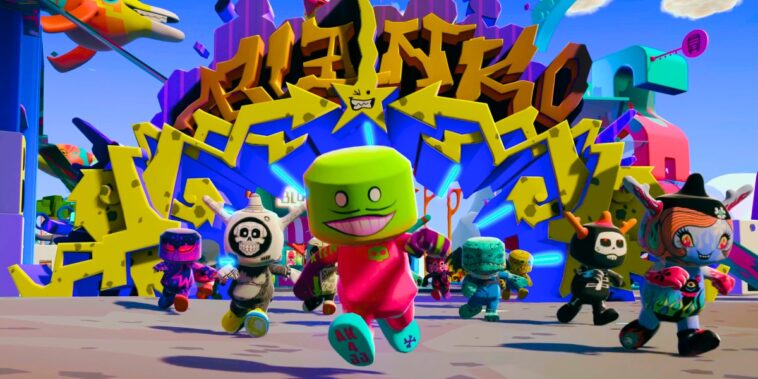 “Blankos Block Party” from Mythical Games is a free multiplayer game that revolves around collectible digital vinyl toys called Blankos. The game — inspired by designer and vinyl toy culture and co-developed by Mythical Games and Third Kind Games — is part of Mythical Games’ push towards creating games with playable NFTs where the characters are NFTs users can own.

In Blankos Block Party, toys come to life in the form of avatars and players can have adventures, build worlds, create games, socialize, and of course, have a block party. The NFTs in the game symbolize unique products like avatars, skins, and accessories that can be bought, sold, traded, and upgraded within the game.

Blankos Block Party was previously released on the developer’s own website in December 2020. Since release, the game has partnered with artists and brands including Burberry, Atari, and Deadmau5.

Unlike Epic Games’ rival Valve and its Steam marketplace — which has chosen to opt out of crypto and blockchain-based games — the CEO of Epic Games Tim Sweeney said that the company will permit creators to develop Web3 games if they comply with market norms and legal requirements.

The release of the title comes less than a year after a Series C funding round for Mythical Games that raised $150 million at a valuation of $1.25 billion. At the end of 2021, Epic Games Store reported over 190 million players.

Blockchain-Based Gaming Is a Growing Market

Although the gaming industry and gamers were initially skeptical of NFT and blockchain-based games, it appears the tides are turning. At Rarity Sniper, we’ve reported on several gaming developers investing in the NFTs and the metaverse.

Here are some recent headlines involving gaming and Web3:

Even in the bear market, Web3 games are becoming more popular. One of the main reasons is because NFT technology allows players to own in-game items that can be sold, stored, or traded on the blockchain. This adds a play-to-earn dynamic that was not possible before blockchain technology.

We’ll have to wait and see if the new NFT game launched on Epic Games’ marketplace will be a success. But either way, we think there’s a good chance this is just the beginning of blockchain-based titles entering the marketplace.