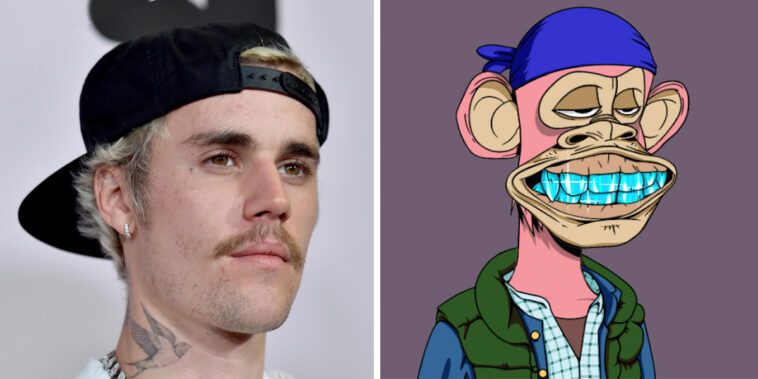 Over the weekend, the Canadian-born superstar Justin Bieber bought another Bored Ape NFT for around $470,000 worth of ETH.

The Bored Ape Yacht Club (BAYC) is a collection of 10,000 algorithmically generated aloof-looking ape NFTs that grant holders various utilities including membership to the “Yacht Club” and other “members-only benefits.”

Released by Yuga Labs in April 2021, BAYC has become one of the most valuable NFT collections of all time and it appears its star is still rising.

The purchase is the singer’s second Ape. Last week, he bought Ape #3001 for 500 ETH or about $1.3 million at the time. As one of the least rare Apes in the collection, many NFT enthusiasts on Twitter believed Bieber overpaid for his first ape.

His most recent addition, Bored Ape #3850, was purchased from the NFT Marketplace OpenSea for 166 ETH.

The Bored Ape is ranked #1484 out of 10,000 in rarity. Some of its rarer traits include a blue bandana (.89 %) and a green puffy vest (2.27%). Its most rare trait is its mouth, which is a Grin Diamond Grill and only appears 78 times in the entire collection.  The Ape also has a purple background, pink fur, and bored eyes.

As of late, a myriad of athletes, musicians, and celebrities have bought into BAYC and boosted its mainstream exposure and popularity. The list of celebrities who now own a Bored Ape includes Serena Williams, Eminem, Meek Mill, Travis Barker, Snoop Dogg, Paris Hilton, and Jimmy Fallon.

Since Eminem and Snoop Dogg are scheduled to perform at the Super Bowl together on Feb. 13, many people in the BAYC have speculated that they may implement their Apes into the halftime show. If that proves to be the case, millions more people around the world could be exposed to BAYC specifically and non-fungible tokens in general.

Of course, no one knows for sure what the halftime show will consist of. What is certain is that with a current floor price of 99.99(around $300,000) ETH per Ape on OpenSea, BAYC doesn’t appear to be slowing down.

Another endorsement from one of the most famous singers in the world likely won’t hurt their cause.