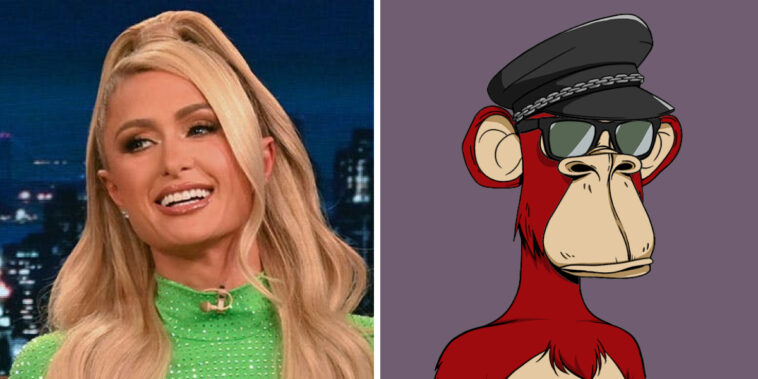 It appears Paris Hilton has aped into the Bored Ape Yacht club (BAYC) with Ape #1294. Early this week she announced her entrance into the popular non-fungible token collection on the Tonight Show with Jimmy Fallon, who also owns an Ape

Not one to miss an opportunity, Hilton used her Ape and the topic of NFTs to plug her own NFT project “My Forever Fairytale,” which is branded as a collage of her “memories” and was created in collaboration with Superplastic, a digital collectibles firm. She even gifted an NFT from her upcoming collection to Fallon and every audience member of the Tonight Show.

With the purchase, Hilton joins a long list of celebrities who are members of the Bored Ape Yacht Club, including Steph Curry, Eminem, Meek Mill, Serena Williams, Travis Barker, Kevin Hart and more.

The Bored Ape Yacht Club was created in 2021 by Yuga Labs and has become one of the most popular NFT collections of all time. Much of its success has been due to the community it’s fostered around the project and the enthusiasm its members have for the generative art NFT collection.

As the floor price of the Apes continues to rise and more A-list celebrities get involved, BAYC appears to be transforming into a decentralized media empire of sorts. Only time will tell what the future holds for BAYC, but if 2021 was any indication and Hilton and Fallon have anything to say about it, it looks bright.

Unfortunately for Hilton, the internet didn’t appreciate the obvious plug of her NFT collection or the flaunting of the expensive NFTs by her and Fallon, and there was plenty of grumbling on Twitter.

That said, and as Fallon mentioned on-air, Hilton was listed this year as one of “Fortune’s Top 50 Most Influential People in NFTs” for a reason. It will be interesting to see what type of influence she can bring to the BAYC, which is already bursting with star power.