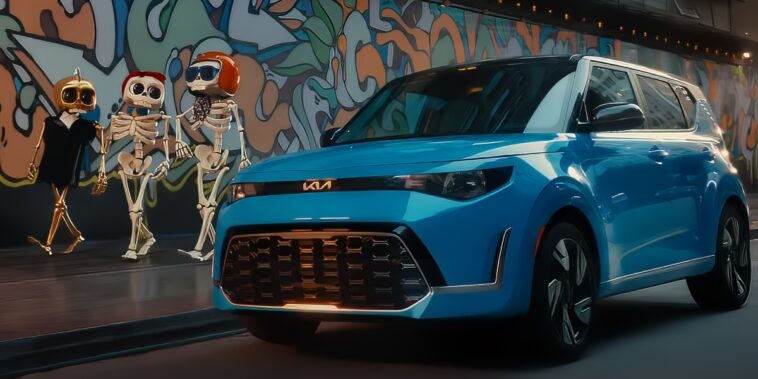 KIA America is launching a series of non-fungible tokens (NFTs) for its marketing campaign for its new 2023 KIA Soul.

There are currently 10,100 Kia America-themed NFT tokens available through the Sweet NFT stage, which will run until November 30th. To receive one of these NFT tokens, viewers must scan a QR code with the Sweet NFT app on their smartphone.

The marketing strategy, called “Built for whoever you are”, includes a 30-second spot highlighting the NFT characters. It shows three of the most famous characters as they ride in the new 2023 Kia Souls.

The NFTs are a part of a larger collection called the Dead Army Skeleton Club (DASK), which includes over 150 hand-drawn traits. The 10,000 KIA America NTFs were inspired by the new Kia Soul 2023 and the other NFTs featured in the ad.

This isn’t the first time KIA America has worked with Sweet. In 2017, KIA America partnered with Sweet to create a unique NFT called the “Robo Dog,” inspired by KIA’s Super Bowl commercial featuring a robot dog.

The Automobile Industry Is Embracing Web3

KIA America isn’t the only ambitious automobile maker in Web3. A few days ago, Nissan Motors reported it would release its new all-electric SUV Ariya in the metaverse. The eco-friendly model will be viewable in Nissan’s virtual showroom the Nissan Electric Lab via desktop, mobile, and VR.

And that’s not all. We covered several car companies investing in NFTs, blockchain technology, and the metaverse. Here are a few headlines from Rarity Sniper involving automobile makers and dealers in Web3 this year:

We’ll be keeping our eye out to see if KIA’s NFT marketing campaign for its 2023 KIA Soul will be successful. But one thing is clear: There’s no shortage of interest in Web3 from the automobile industry.