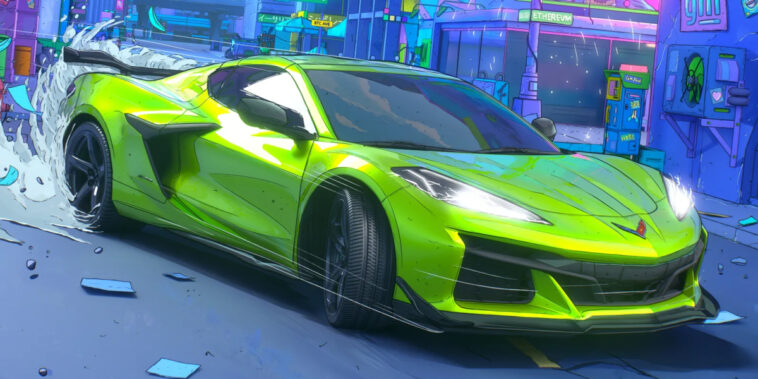 US automaker Chevrolet will drop a one-of-one art NFT on SuperRare that corresponds with a real-life 2023 Corvette Z06. Entitled “Own the Color,” Chevy’s NFT auction is set to last from June 20th till the 24th, and interested buyers must pay with ETH.

Chevy promises that the winning bidder will receive the only IRL Corvette Z06 with a “Minted Green” paint job — the same color depicted in the NFT. The GM subsidiary also said its “Own the Color” NFT grants holders a binary VIN, a special plaque, and the option code RFN.

According to Newsweek, Xsullo will display his “Own the Color” NFT during the NYC.NFT festival. Anyone in the Big Apple could see this NFT at New York’s Crypt Gallery.

Whatever proceeds GM raises from its first NFT auction will go to the nonprofit DonorsChoose.

Buying Cars on the Blockchain is Becoming Common

The “Own the Color” auction may be Chevy’s first step into Web3, but many other car makers have auctioned NFTs associated with literal vehicles. Indeed, just a few months ago, Rarity Sniper reported on Lamborghini selling a historic Aventador LP 780-4 Ultimae Coupé with an NFT designed by Krista Kim and Steve Aoki.

Interestingly, the DeLorean Motor Company says it will use NFT technology to sell the ownership rights for its limited release Alpha5 electric vehicles. In addition to authenticating car ownership, DeLorean suggests its upcoming NFTs will be “gameable” in many popular metaverse platforms.

Speaking of NFT cars in the metaverse, McLaren Automotive recently announced an NFT partnership with the company InfiniteWorld. This deal aims to offer McLaren exclusive NFTs to fans on InfiniteWorld’s metaverse platform. However, it’s unclear whether McLaren intends to sell its physical vehicles with NFTs.

Alfa Romeo is another carmaker using the blockchain in its business operations. Specifically, Alfa Romeo says people who order a 2023 Tonale SUV will get a corresponding NFT that serves as a “digital certificate” and will record maintenance work on the blockchain.

There’s even a crypto-friendly marketplace called “CarForCoin” that sells IRL luxury vehicles tied to NFTs. Whoever wins the car NFTs on CarForCoin gets the physical vehicle and a QR code that helps verify both NFT & car ownership.

Even if car companies aren’t selling NFTs with their vehicles, many accept transactions over the blockchain. For instance, Ferrari recently made headlines when it sold a 1989 Ferrari 640 for $3.6 million paid in crypto.

It may not be long before customers can buy any vehicle using blockchain technology.