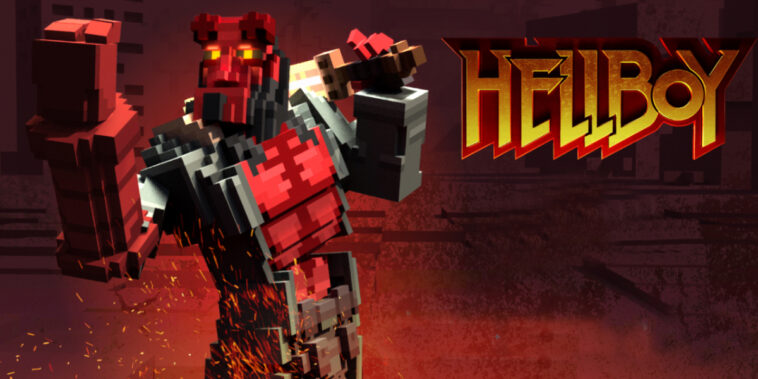 The film and entertainment company Lionsgate agreed to bring some of its hit franchises into The Sandbox metaverse. According to The Sandbox’s Twitter feed, “Hellboy” will be the first Lionsgate movie to appear in a new virtual area called “Action City.”

The Sandbox also posted a short teaser trailer for the upcoming “Hellboy” metaverse experience. In this clip, viewers could see a voxel-style Hellboy avatar burst out of a box and wield a sword that resembles Excalibur.

At the start of The Sandbox’s promo, there are a few other boxes to the side of Hellboy. These crates have logos for two other Lionsgate properties: “Rambo” and “The Expendables.” Lionsgate will eventually bring characters from these series to “Action City.”

It’s unclear what games Lionsgate is building in “Action City,” but they will involve characters, settings, and items from its action films. Lionsgate executive Jenefer Brown said gamers will get the chance to “create, play, and explore” these films in ways that aren’t “possible in the physical world.”

The Sandbox tweeted that Lionsgate was the “first film & TV studio” to partner with the metaverse project. And it appears “Action City” won’t be Lionsgate’s only virtual experience in The Sandbox.

Multiple reports suggest Lionsgate wants to open a seperate horror-themed area in The Sandbox. At this time, however, Lionsgate hasn’t released specifics on what this new land will look like or when it will open.

Lionsgate Movies Merge With the Metaverse

Lionsgate has already shown an interest in bringing its IP into Web3 applications. For instance, the Santa Monica-based studio entered a contract with Tom Brady’s NFT market Autograph. “Dirty Dancing,” “John Wick,” and “The Hunger Games” are a few of the Lionsgate franchises that are slated to appear in NFT drops.

After revealing its deal with Autograph, Lionsgate announced an NFT giveaway for the sci-fi film “Moonfall.” Anyone who saw “Moonfall” in an IMAX on its release date could have won an exclusive NFT. Lionsgate also developed a space-themed AR experience to help promote “Moonfall.”

Interestingly, Lionsgate joined forces with The Sandbox’s parent Animoca Brands long before “the metaverse” was trending. In 2016, Animoca Brands helped create a mobile game to promote Lionsgate’s animated film “Norm of the North.”

However, Lionsgate isn’t the only media giant eager to bring its brands into Web3. Paramount is now developing a “Star Trek” metaverse game with NFT spaceships and characters. Warner Bros. also released interactive NFT avatars based on “The Matrix.”

Even the Walt Disney Company has expressed interest in using the metaverse to create immersive experiences for its fans. Disney already released a VR “Star Wars” experience with Meta, and it recently hired a former Apple exec to head its metaverse division.

Whether it’s metaverse games or NFTs, film studios like Lionsgate are bringing their IP into Web3.