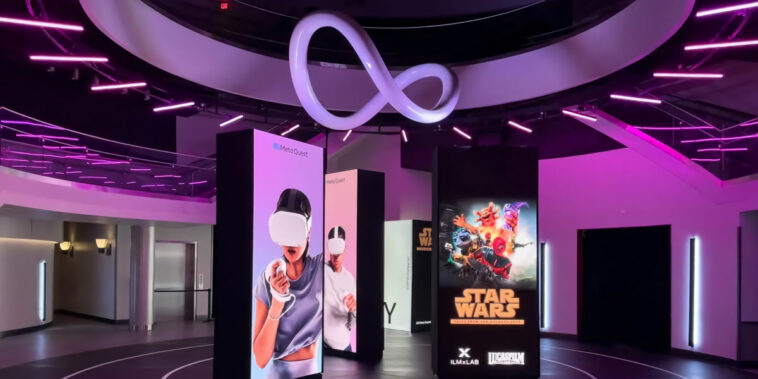 Star Wars fans will have an exciting new VR adventure awaiting at Disney Springs this summer. Meta Quest, ILMxLAB, and Disney Parks are collaborating to produce a preview of Star Wars: Tales from the Galaxy’s Edge at the Orlando, FL resort.

The adventure starts after strapping on a Meta Quest 2 headset. You will see sweeping 360-degree views of the Stars Wars universe before settling on the outskirts of the Black Spire Outpost in Batuu. The experience is dubbed “action-adventure,” and you’ll take on a couple of roles throughout the VR storyline.

Those who complete the VR experience will receive giveaways and be eligible to buy a Meta Quest 2 headset onsite. Anyone who attends on May 4th will have the opportunity to score an exclusive Star Wars poster of the Guavian Death Gang.

For now, the Tales from the Galaxy’s Edge virtual reality story will only be available from noon to 10 pm on the Disney Springs West Side. It will run from May 2nd to July 21st. To participate in the VR experience, users must be at least 13 years of age or older.

According to an Oculus Quest blog post promoting the event, this is not the first Meta and Disney collaboration. The first — another VR experience — occurred at the Downtown Disney District in November of 2021.

Mark Zuckerberg caused quite a stir when he changed Facebook’s name to Meta last year. The move sparked headlines worldwide and signaled to his competitors and consumers that the metaverse was his ultimate ambition.

Since then, there has been an upsurge of interest in all things related to Web3. In addition to this partnership with Disney, Meta has been busy. Recently, its metaverse Horizon Worlds surpassed 300,000 users. The company has also opened its first physical store to showcase metaverse technology.

Disney, too, has stated some of its Web3 intentions. A few months back, news broke that the U.S. Patents and Trademarks office had approved a “virtual world simulator” for the company. Although the announcement was vague on details, the rumor was that Disney wanted to bring the metaverse to its resorts. It has also put out a job posting for an NFT expert, drumming up the excitement that Disney would enter the non-fungible token space.

Although it remains to be seen how Disney, ILMxLAB, and Meta’s collaboration will go, there’s no doubt that the metaverse and its technologies continue to gain steam.