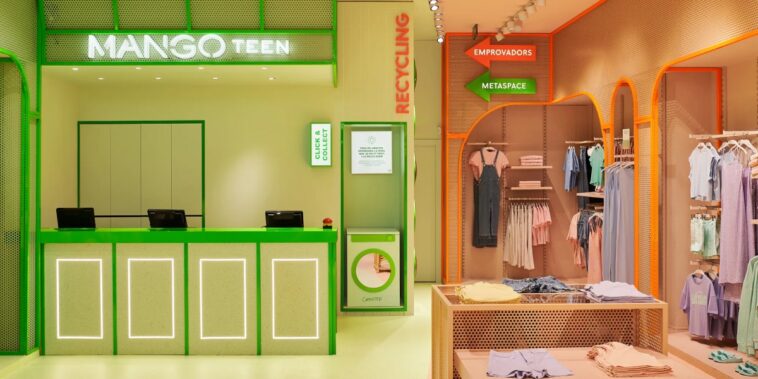 Masquespacio, a creative design agency, has launched a specialty Mango clothing store aimed at teens, and it has a Web3 touch. The “metaverse world” Mango store incorporates design elements that foster imagination and dreaming, along with conceptualizing a future through technology. Here are all the details:

The goal for Masquespacio was to create a unique shopping experience while still displaying as many clothes as possible. To that end, it used incoherent but playful features like a swimming pool ladder to display clothing and a clothes drop-off point that looks like a washing machine. It also has a backlit, futuristic tunnel.

All the elements, according to Masquespacio, were designed to “invite the teens” to enter a world where new uses are given to commonplace objects, letting their imagination play with them and dream up new ways to use the space.

As for the metaverse, Masquespacio said that in the store, “dreams are made into reality” as your mind plays with the design elements. The space allows users to interact with it, bringing the metaverse world into reality.

Like many futuristic concept stores, the Mango teen store has spaces for teens to take pictures for social media and other tech features. The reflective walls and ceiling particularly help with photos, as they create a futuristic backdrop.

Before 2021, the concept of a “metaverse store” was likely the domain of science fiction, but since the rise in interest in the nascent technology, more metaverse stores are sprouting up. Here are three stories Rarity Sniper has covered featuring stores either in the metaverse or futuristic retail stores that utilize metaverse technology.

Five days ago, the organization behind the popular blockchain Solana opened a physical store in Manhattan, New York. The store, which billed itself as the first retail and educational store devoted to Web3, will offer IRL physical merchandise as well as introduce people to the Solana blockchain.

A month ago, Mark Zuckerberg, the CEO of Meta, announced the opening of a virtual metaverse clothing store. Users who visit the shop will be able to buy clothes to outfit their avatars, with the store being accessible through Meta’s suite of applications: Facebook, Instagram, and Messenger.

Five months ago, Sketchers beat both of those companies to the punch when sharing plans for a sneaker store in metaverse Decentraland. The sneaker organization said at the time that it was looking forward to connecting with customers in novel ways and delivering a new Sketchers “experience.”

The Mango teen store Masquespacio designed in Barcelona is an interesting turn for the retail industry, which seeks to target younger age groups as they gain purchasing power. And, as the other stories showed, the metaverse is ripe with innovation as well, which could lead to exciting things to come.