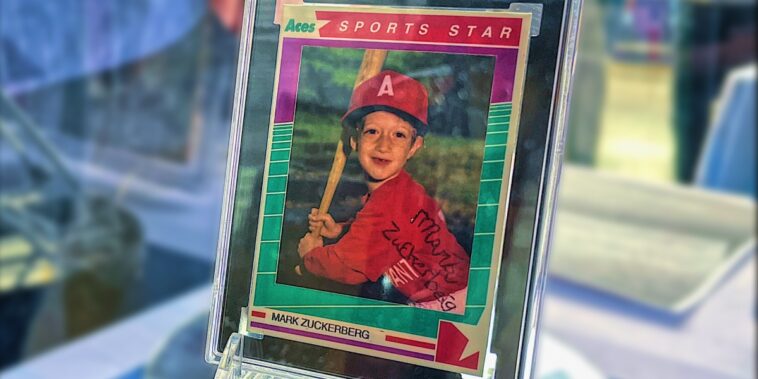 Mark Zuckerberg has made the news quite a bit in 2022. From Meta’s pursuit of the metaverse to Facebook’s parent company struggling in the stock market, it seems not a week goes by when there’s not another article about the 38-year-old billionaire. Now, Rarity Sniper can report on another Mark Zuckerberg developing story, this one from a Web3 angle: the sale of his little league baseball card.

As ComicConnect.com shared in an Instagram post, Zuckerberg gifted the card to Allie Tarantino, Zuckerberg’s camp counselor, when the Meta CEO was nine years old. The card features a young Zuckerberg in a red baseball outfit holding a bat and wearing a red cap with a white “A.” When Tarantino received the card, they playfully asked Zuckerberg to sign it, as if he were a professional baseball player.

Zuckerberg obliged, and Tarantino held onto it for around 30 years. Now, the camp counselor is deciding to sell it in an auction. There will be two official versions — the physical card and a digital version in the form of an NFT. Tarantino will supply accompanying documentation verifying the authenticity of the card and the signature.

Tarantino said they have been telling this story for years, and people are “astonished” that the card exists. They are putting it up for auction because they believe their role in the story is over, given Zuckerberg’s rise in the tech world and status as one of the most famous people on the planet. They believe there is a real demand for the card but estimating its value is difficult. The auction for the physical card will start at $1.

Details are scarce about the NFT version of the card, such as the blockchain that will host it, the site where the auction will take place, the cryptocurrency needed to bid on the card, and the starting price. But one thing Zuckerberg has made clear: He will not be receiving any money from the proceeds of the sale.

As mentioned, not a week goes by when Zuckerberg is in the news for something, and often it involves Web3. The Meta CEO has not kept his metaverse ambitions a secret, and this year he has made changes to the Facebook and Instagram platforms to reflect that. Here are three stories about those platforms and Web3 from 2022.

First, there is Instagram’s non-fungible token integration. As Rarity Sniper recently reported, the social media platform has now expanded the NFT integration to more than 100 countries, while previously, access to the features had been limited.

Second, there is Facebook’s NFT integration. Although the Facebook integration has been a little behind that of Instagram’s, Facebook recently started testing NFTs with select creators about a month ago. Part of the integration will allow Facebook creators to “show off their NFTs” in posts and elicit reactions.

Third and finally, there are the new 3D avatars Meta rolled out for its suite of products — Facebook, Instagram, and Messenger. The 3D avatars were supposed to be more “life-like” and featured certain attributes to be inclusive to the handicapped community, like Cochlear implants.

The auction of Mark Zuckerberg’s little league baseball card is certainly an interesting story, especially because the people behind the auction are turning it into an NFT. Here at Rarity Sniper, we’ll keep our ears to the ground for further developments.