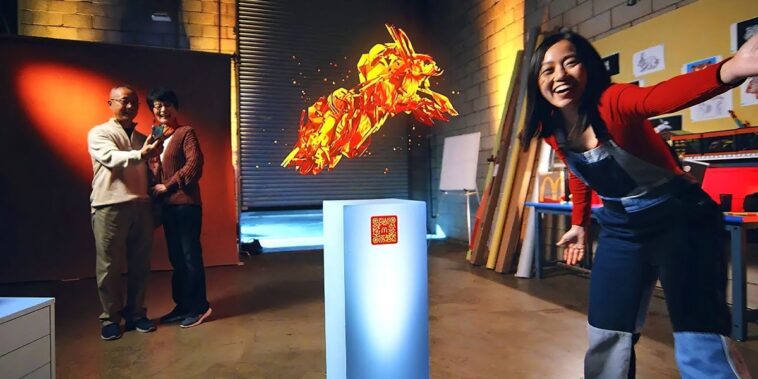 McDonald’s is moving beyond burgers and fries. The fast-food giant is teaming up with award-winning digital content creator Karen X Cheng to serve up art and culture in the metaverse.

On January 25th, fans can celebrate the Lunar New Year with people from around the world in the Spatial metaverse. They can also spend a virtual evening with the artist on February 2nd.

The virtual and augmented reality experience will contain 3D illusions, 3D sculptures of the 12 Chinese zodiac animals, and a myriad of activities and experiences that combine futuristic and traditional Asian influences. Classic Chinese games like Mahjong and Weiqi will be available, as well as virtual cooking competitions and zoos.

Users can visit the metaverse via a customizable 3D avatar designed by McDonald’s — available at the McDonald’s Lunar New Year website.

Cheng is a popular digital storyteller and the founder of Karen X Inc., a company that creates interactive experiences. She has worked on several projects in various industries, from technology to media. She said she was “excited to bring her heritage and that of the AAPI Asian Americans and Pacific Islanders) to life” with McDonald’s this year.

The news was released via an AI-powered commercial that’s one of the first commercials to use NeRF (neural radiance fields) technology, a tech that uses artificial intelligence to generate a 3D scene. Some of Cheng’s artwork for the metaverse experience can be viewed by scanning an on-screen QR code at the end of the ad.

Senior McDonald’s Official Elizabeth Campbell added that the company was excited to start the new year by inviting fans to participate in a “global cultural celebration” that honors the legacy of the Lunar New Year in a novel way.

While the idea of fast food in the metaverse can seem a bit odd, McDonalds isn’t the only fast food giant to make moves in Web3 recently. At Rarity Sniper, we’ve written several articles about fast food chains opening shop or showing interest in virtual worlds. Here are some of the top stories.

First, in March 2022, Yum! Brands — the company behind Taco Bell, Pizza Hut, and KFC — filed patents related to Web3, NFTs, and the metaverse. The patents imply Yum! Brands wants to use non-fungible tokens for promotions and customer rewards programs, which could be redeemed in physical or virtual settings.

Next, on April 7th, Chipotle dropped a virtual Burrito Builder game in the Roblox metaverse. The virtual Chipotle restaurant where fans were given the chance to test their burrito-rolling skills and earn rewards was based on Chipotle’s first physical store in Denver, Colorado.

A few short years ago, few people thought the metaverse would be a place of interest for fast food chains. Now it looks like they’re flocking to it, and we expect more will follow. At Rarity Sniper, we’re curious to see how McDonald’s and Karen X Cheng’s metaverse experience turns out.