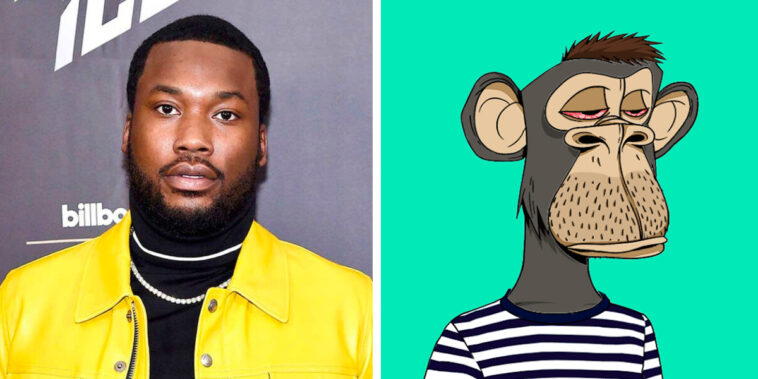 Philadelphia rapper Meek Mill joined the growing list of celebrities who have “aped” into the Bored Ape Yacht Club, one of the most prestigious and valuable NFT collections to date.

A picture posted on Instagram on New Year’s shows BAYC member Myjeanious with rappers Lil Baby and Meek Mill holding up his cell phone with Bored Ape #6877 on it.

The ape was reportedly transferred to Mills by Moonpay, a crypto company that purchased the ape for 65.2 Eth ($241,000) earlier in the day and transferred it to Mill’s wallet.

The news comes just a few days after Eminem purchased a Bored Ape for a whopping $462,000 (123.45 ETH), bringing even more excitement to the already thriving and vibrant BAYC community.

Bored Ape Yacht Club is a collection of 10,000 generative non-fungible tokens depicting bored-looking apes with a variety of traits and characteristics that vary in rarity. Released by Larva Labs in April 2021, the collection of profile picture ape NFTs have generated more than a billion dollars in sales and Larva Labs has forged partnerships with brands like Adidas and even appeared on the cover of Rolling Stones Magazine.

Mills Ape #6877 has bloodshot eyes and sports a short mohawk and navy striped tee. The savvy and sometimes controversial rapper likely made a wise move by buying into one of the most transformative NFT collections ever created, and will enjoy many benefits from his membership in the club.

Of course, Meek Mill is not the only celebrity to ape his way in to the BAYC. Other celebrities who own Bored Apes include Jimmy Fallon, Steph Curry, Mark Cuban, Post Malone and Logan Paul.

The purchase comes a few months after the release of Mill’s latest album Expensive Pain, which was released on October 1st, 2022, and debuted as #3 on Billboard 200—becoming the seventh album of his career to reach the Top Ten.

While Meek Mill’s purchase of Bored Ape #6877 brought more buzz to the BAYC collection and set NFT twitter ablaze for a few hours, the farsighted rapper likely knows that publicity from Bored Apes is a two-way street. In other words, it will be interesting to see what his membership in this esteemed club will bring his way in the months and years to come.