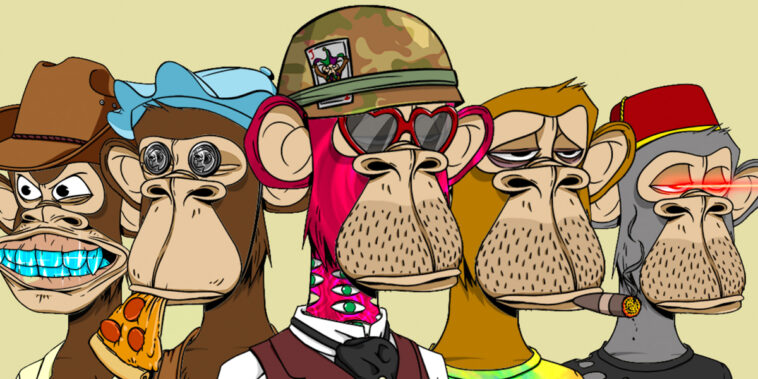 Bored Ape Yacht Club (BAYC) is a Non-Fungible Token (NFT) collection that was launched by Yuga Labs in April of 2021 and has since generated an enormous following and recorded record-breaking sales.

The collection of 10,000 profile pictures of Bored Apes was created using randomly-generated traits and accessories and launched by four developers with the aim of building a community that would grow and evolve together.

Initially, the Bored Ape NFTs, which double as Yacht Club membership cards and grant access to the exclusive community, sold out in less than a day for a minting price of .08 Ether each, around $200 at the time. Today, the least expensive Bored Apes sell for over $200,000 and Apes have sold for millions of dollars.

Unsurprisingly, the success of BAYC has been covered by major news outlets around the world, and Bored Apes are being bought and collected by a range of celebrities and athletes.

As BAYC NFTs continue to climb in value and major brands and stars become involved in the community, Yuga Labs looks like it’s positioning itself as a major entertainment company with far-reaching cultural influence for years to come. Let’s look at how it all started and what made the Bored Ape Yacht Club what it is today.

The History of BAYC

The BAYC was founded in 2021 by a writer and a programmer in Miami who went by the pseudonymous names Gargamel and Gordon Goner. They brought on two coders, Emperor Tomato Ketchup and No Sassi, to code the project onto the Ethereum blockchain and hired illustrators to create the first BAYC graphics, which consist of bored-looking apes with distinct traits and characteristics and a website containing graphics of a “swamp” dive bar.

On April 30th, 2021, BAYC launched 10,000 computer-generated ape avatars priced at .08 ETH each. It was a “fair launch” because the apes were sold for a set price, and a “fair distribution” since anyone with Ether and a crypto wallet could purchase an ape.

The collection sold out in less than 12 hours, and it wasn’t long before apes were appearing on secondary markets like OpenSea and Rarible and selling for much more than the mint price. In fact, just six months after the release of the NFT collection, BAYC became 3rd in all-time sale volume on OpenSea with over $450 million in sales.

Since their release, the price tags on Bored Apes have soared and the collection currently stands as one of the best-selling NFT projects.

One key feature of the BAYC NFT collection is that it promises access to a club that includes offerings and benefits that increase with time. The full roadmap can be found on the BAYC website, but some of the benefits and community projects involve a YouTube Lofi BAYC radio station and exclusive merch for members.

On August 28th, 2021, a “Mutant Ape Serum” was dropped to existing Bored Ape owners. The serum was offered to all BAYC owners for the price of gas fees and allowed for 10,000 new digital Mutant Ape NFTs to be created as well as 10,000 additional Mutate Apes NFTs to be minted by the public for a price of 3 ETH. Currently, Mutate Apes have a floor price of around $35,000 each, or 7.5 ETH.

Another project, the Bored Ape Kennel Club, which was released on June 25th, 2021, consists of digital dogs that could be adopted only by Bored Ape owners. These Mutant Apes and Bored Kennel Ape Club drops have created new collections of NFTs for the BAYC community and by doing so increased the value of membership.

As BAYC grows in popularity, several projects with major brands and celebrities are in the works. In less than a year, Bored Apes Yacht Club has gone from an unknown NFT collection to one of the most successful NFT projects of all time.

When you purchase a Bored Ape, you receive ownership of a distinct, verifiable digital asset that exists on the Ethereum blockchain. The value of your ape depends largely on its rarity within the collection, which is determined by the different traits and characteristics that each ape has. Each Bored Ape was randomly generated using over 170 possible traits that include clothing, headwear, futuristic accessories, and more.

Listed below are the seven sets of traits that Bored Apes are generated from:

Within each trait, there is variety. For example, the “Bored Dagger” mouth trait only appears 49 times in the collection, making it extremely rare and therefore more valuable. In fact, Bored Ape #7495 is ranked as the rarest ape on Rarity Sniper largely because of its dagger mouth and other rare traits like cyborg eyes.

If you are considering buying a Bored Ape for your collection, it’s important to understand the traits and rarity of the ape you are purchasing. Fortunately, there are sites like ours that rank NFTs within a collection based on rarity.

One of the biggest reasons behind Bored Ape Yacht Club’s success is that it was one of the first NFT collections to combine amazing art with access to a vibrant community.

The BAYC website includes cool digital art of a “swamp” dive bar, the hangout of the Bored Apes, and ownership of a Bored Ape comes with numerous memberships and perks. In many ways, a Bored Ape functions like a key that opens digital doors for its owners.

Listed below are a few of the benefits involved with owning a BA and being part of the community:

Clearly, the BAYC team is focused on providing evolving utility for its members. With the airdrop of the Mutant Ape series and the Bored Ape Kennel Club, existing Ape owners were able to become owners of additional valuable digital assets, which besides the financial benefit, also served to strengthen the bonds within the BAYC community.

Future projects in the works by the Bored Ape team include a member-only treasure hunt and mutant breeding.

The Success of BAYC

The success of Bored Ape Yacht Club has been nothing short of phenomenal. In less than a year, the Bored Ape team has created a billion-dollar ecosystem between two related projects (BAYC and the Mutant Ape Yacht Club).

Considering that people who bought into the original drop of 10,000 Apes paid a mint price of .08 ETH per Ape and the current floor price (the lowest price you can purchase a BAYC NFT) is over $200,000 at this time of writing, a lot of money has been made and lives have been changed because of BAYC.

Listed below are some of the top sales of Bored Ape NFTs:

But more than just the high prices, BAYC has managed to fulfill its promise of creating a thriving community that is posed to be a major player in entertainment and culture for years to come.

Here are some of the other successes and highlights from BAYC in 2021:

According to Coingecko, the current market capitalization of Bored Apes stands at more than $2 trillion and the project has the highest trading volume of any NFT. Considering that BAYC has been around for less than a year, its rapid growth is astonishing.

A Closer Look at Celebrities with BAYC

When a major celebrity buys an NFT, there’s no doubt it helps boost the value and brand of the collection. There are few NFT collections that have had as much success enticing celebrities as Bored Ape Yacht Club. Below are some of the biggest names that have purchased a Bored Ape or Mutant Ape and some details about their involvement:

The attention that these big names bring to Bored Ape Yacht Club in particular and NFTs, in general, is huge, and it increases the value of ownership for all members of the BAYC community. In the future, be on the lookout for more stars to “ape in” and become proud owners of BAYC NFTs.

There have been several recent developments by the Bored Ape team and members of their community to create other up-and-coming BAYC or BAYC-affiliated projects. Listed below are two exciting new NFT projects inspired by Bored Ape Yacht Club:

As BAYC moves into the future, we can expect more news of exciting projects, collaborations, and future drops from the creators. As a decentralized project where everyone has the commercial IPO rights to their NFTs, it is also likely there will be many more projects from BAYC community members that feature their Bored Apes.

How to Get Involved with BAYC

Although all 10,000 Bored Apes were sold out shortly after release, there are still a number of ways you can get involved with BAYC. Listed below are some of the ways you can still purchase a Bored Ape, Mutant Ape, or involve yourself with the project:

Finally, you can follow BAYC on Twitter and Discord to learn about what’s going on in the community and any future releases by Yuga Labs. Twitter and Discord allow Bored Ape NFT owners and fans to connect and also take advantage of exclusive merch releases and other offerings. BAYC Twitter currently has over 318,000 followers.

The regular discussions and interactions on these forums strengthen the BAYC community and add an element of social investment to the club. There are also occasional giveaways of Bored Apes and Mutant Apes on Twitter.

NFT Projects that Are Similar to BAYC

Although BAYC is clearly an outstanding NFT project, because of its popularity and the high price of buying a Bored Ape or Mutant Ape, it can be difficult for newcomers to buy-in. Fortunately, there are several NFT collections that are similar to BAYC that have lower floor prices.

Listed below are a few other NFT projects that are similar to BAYC:

Since new NFT projects are released every day, it can sometimes be difficult to separate the gems from the throwaways. To find new and emerging NFT collections before they drop you can check out the Upcoming Projects section on RaritySniper.com.

While the artwork and concept created by BAYC are distinct and cool to look at, the success of Bored Apes should also be attributed to their vision for building a strong community.

When you “ape in,” or become an owner of a Bored Ape NFT, you are granted access to a digital community referred to as the Swamp Club, and membership to this community involves continual rewards.

And beyond the useful rewards that can be gained from access to the Swamp Club, like Mutant serum drops and exclusive offers on merch, Ape avatars are also used as markers of status.

Many celebrities have chosen to post their Bored Apes as their profile pictures on social media, and posting an Ape avatar usually generates more followers on social media for the owner.

In summary, the combination of fantastic digital art, a thriving community, and a roadmap that promises future benefits to members sets BAYC apart from other NFT projects.

How to Evaluate and Buy a Bored Ape

If you’re considering purchasing a Bored Ape, Mutant Ape, or Bored Ape Kennel Club NFT for your collection, you should do as much research and investigation as possible before making a decision.

By evaluating the rarity of different apes before visiting secondary markets to check the prices, you can get an understanding of which Bored Apes are rarer than others and therefore more valuable.

Another factor to keep in mind when purchasing a Bored Ape or other NFT from Yuga Labs is how much you like the Ape you’ve selected.

Because purchasing a Bored Ape is a major financial decision for most people, you want to make sure you love the artwork and particular NFT that you’re purchasing before you buy it. When you love a piece of artwork, digital or not, you’re more likely to hold onto it no matter the price.