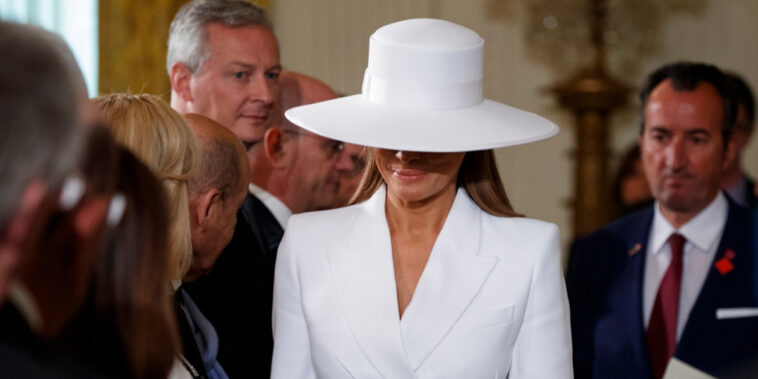 Former First Lady Melania Trump launched her second non-fungible token (NFT) collection this past week, auctioning off a wide-brimmed hat, a painting of her wearing the hat, and an animated version of the hat on the Solana blockchain.

Although the top bid fell below the $250,000 Melania was hoping for, the bid did meet the threshold for the minimum number of Solana tokens. The fall in the value of the tokens occurred during the market-wide crypto crash over the past couple of weeks.

The hat was part of an ensemble that Melania wore when meeting the president of France back in 2018, her first official State visit as part of the Trump administration. Currently, the hat is autographed, so the winner of the auction will now be the owner of an item with a former First Lady’s signature.

Melania is no stranger to the NFT landscape, selling a watercolor NFT painting of her eyes back in December. She has stated that she enjoys the NFT culture, saying it takes her back to her artistic roots. Part of the proceeds of the sale will go to fund Melania’s philanthropic ventures to help underprivileged children.

Former President Trump released a statement after Melania’s first NFT venture, stating her NFT business “epitomizes the American spirit of ingenuity” and that the blockchain will connect her NFTs with art connoisseurs to benefit children in the foster care community.

Her foray into the NFT world was not met without resistance, however, as some NFT users panned her attempts to join the industry. And the auction itself was not much of a success, receiving just five bids during the allotted auction time period.

But it does fall under the playbook of celebrity NFT launches, a genre that has seen mixed success. While some celebrities have tried to engage with the community and build value, others have simply dropped collections as “cash grabs,” taking the sales proceeds and disappearing from the community.

There’s no telling if Melania will continue to release NFTs, but it might pave the way for other former politicians to leverage their personal brands and build within the NFT community.