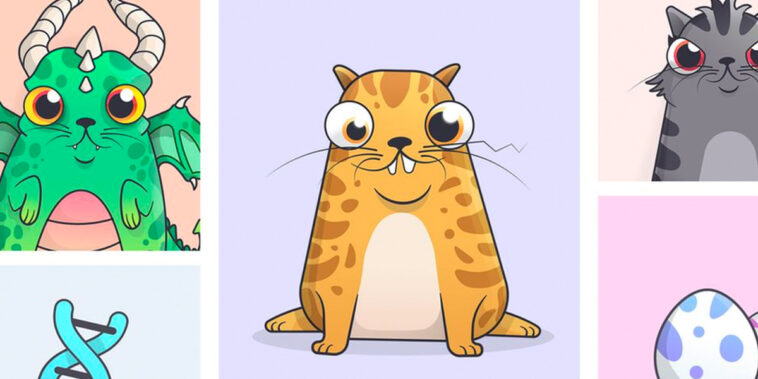 Non-fungible tokens (NFTs) have been making headlines all year as they continue to sell for huge amounts and take the art and gaming worlds by storm. Whether it’s CryptoPunks NFTs selling for millions of dollars or Jimmy Fallon buying a Bored Ape Yacht Club NFT and making it his profile picture, the NFT space is buzzing with exciting news.

While non-fungible tokens can seem like a lot to take in at first, in this guide we’ll break down some NFT key terms, how NFTs function on the blockchain, the success of NFTs, and some advice on how you can buy your first NFT if you’re interested in starting a collection.

So if you’re new to the NFT space and looking to understand this brand-new technology better, you’ve come to the right place.

So what the heck is an NFT? Non-Fungible Tokens are unique, verifiable digital assets that exist on the blockchain. These digital assets can represent real-world objects like art, books, music, videos, and in-game items, and they can be bought or sold on NFT marketplaces using cryptocurrencies.

Some people believe NFTs will change the world, but before we get into the revolutionary capabilities of NFTs, it’s important to understand some basic definitions.

First, most assets are either fungible or non-fungible. Let’s take a look at the difference between fungible and non-fungible assets:

Now that we understand what non-fungible means, let’s look at the last word in NFT — tokens. Though most people are familiar with the concept of a token, not all tokens are the same.

When it comes to NFTs, tokens are cryptographic codes that represent something physical or digital and that can be exchanged for or represent a good, service, or another form of value of utility.

On the blockchain, tokens can represent a variety of things, like a stake, toll, store of value, ownership of a digital asset (an NFT), voting rights, or a currency. When an NFT token is created, it is called “minting,” and afterward it is stored on the blockchain to represent an asset.

So, when you buy an NFT, you are purchasing a cryptographic token that verifies a digital asset and proves ownership and authenticity. Since no two NFTs can have the same cryptographic code, you can think of an NFT like a piece of art in a gallery.

It is a one-of-a-kind digital asset, and the scarcity that comes along with being unique is part of what gives NFTs value. Whereas in the past, digital assets were difficult to monetize, the invention of blockchain technology and NFTs have created scarcity in the digital asset class.

What is blockchain technology?

Now that we know that NFTs are unique digital assets that live on the blockchain and can be bought with cryptocurrency, let’s dive a little deeper into blockchain technology and how it shapes the NFT world.

The blockchain, which was first devised by Satoshi Nakamoto in 2009 with the invention of Bitcoin, is a system of recording data and information that is difficult to hack, change, or defraud because the record is stored on a global network of computers.

The reason this is important is that just like a bank that keeps track of money coming and going through something known as a ledger, the blockchain tracks the buying, selling, and trading of cryptocurrencies and NFTs. You can think of one “block” like one page in the ledger and the blockchain like the entire ledger.

Listed below are the three fundamental pillars of blockchain technology:

In summary, the blockchain is a secure transaction system that verifies the ownership and authenticity of digital assets. Although the blockchain was originally created to record the movement of fungible digital assets like Bitcoin, some blockchains, such as Ethereum and Solana, have created networks where non-fungible tokens are supported.

The Ethereum blockchain was founded by Vitalik Buterin and went live on July 30th, 2015. When it comes to NFTs, there is no other blockchain that has been as fundamental to NFT development as Ethereum.

Because Ethereum is an open-source blockchain with smart contract functionality, it allows developers to make improvements and modifications to the network. This flexibility in the Ethereum network is what enabled NFTs to grow and evolve over the past four or five years.

Listed below are some of the most important modifications to Ethereum that affect NFTs:

Because of early innovation by developers, Ethereum quickly became the top blockchain for NFTs. Listed below are some of the most successful NFT projects that were launched on the Ethereum blockchain.

However, Ethereum is no longer the only blockchain in the NFT game. Since they got the ball rolling in 2018, other blockchains have begun to host NFTs. Some of the most common alternative blockchains that host NFTs besides Ethereum include Solana, Flow, Cardano, and Tezos.

What do NFTs get from blockchain technology?

In order to understand how NFTs work, it’s important to know the role that blockchain plays in their existence. Listed below are some of the qualities that blockchain technology helps enable and that is vital for NFTs:

These are the most important ways that blockchain technology adds unique value-driving properties to NFTs. Furthermore, with digital assets like NFTs, there is far less risk of theft and virtually no chance of them being destroyed in a fire or natural disaster.

The History and Success of NFTs

The success of NFTs during their short history has been nothing short of spectacular, and the story is filled with the names of important artists and projects that helped shape what we know as NFTs today.

Let’s look at how NFTs got started:

While many of the early precursors to NFTs ran on the Bitcoin blockchain, it wasn’t until Ethereum came along in 2015 that NFTs started shifting to the Ethereum blockchain. The two most important NFT projects early on were CryptoKitties and CryptoPunks:

After the release of these two projects, NFTs slowly began evolving and demanding more attention from the public. Some of the other major developments occurred in the gaming space and metaverse projects.

One influential project in this space is Decentraland ($MANA), where gamers have the ability to play games, collect items, build things, and most importantly have ownership over everything they buy, find, build, earn, or trade for within the game.

According to JP Morgan, the NFT market is now worth more than $7 billion, so it’s no surprise that their success has caught the eye of the public, the press, famous celebrities, and investors around the world.

There’s no doubt that another reason NFTs have made headlines and garnered attention these past couple of years is because of some of the record-breaking sales of digital assets.

Listed below are the top five NFT sales to date:

Another interesting project and big-selling NFT that doesn’t quite make the top five is Edward Snowden’s Stay Free NFT, which raised $5.4 million to benefit the Freedom of the Press Foundation.

The Future of NFTs

There is no doubt that NFTs are still new and evolving, so it is difficult to predict where the future is headed and what we should expect. Although a lot of the focus early on has been on NFT art and gaming items, there are several other projects in the works in other areas, and the potential for the future use of NFTs seems almost open-ended.

Listed below are some other genres of NFT art where non-fungible tokens are starting to make inroads:

The implications of NFTs and blockchain technology also touch real estate, events, ticketing, verifying digital identities, and potentially many other spaces still unknown. Although we can’t know exactly what to expect from the future of NFTs, we should expect the release of even more exciting NFT projects in a variety of different categories.

Where can I buy an NFT?

If you’re interested in getting involved with NFTs, there are several NFT marketplaces where you can buy, sell, trade, and browse for digital assets. Some of the most important NFT marketplaces include OpenSea, Rarible, Nifty Gateway, NBA Top Shot, Solanart, and SuperRare.

When you shop for NFTs, make sure you do thorough research before investing in an NFT project and only invest money you can afford to lose. Finally, one of the most important things to keep in mind when buying and collecting NFTs is the rarity of the NFT you wish to purchase.

The rarity of a particular NFT within a collection is based on the rarity of their traits and the combination of traits, and as you might suspect, the rarer an NFT is, the more valuable it will be.