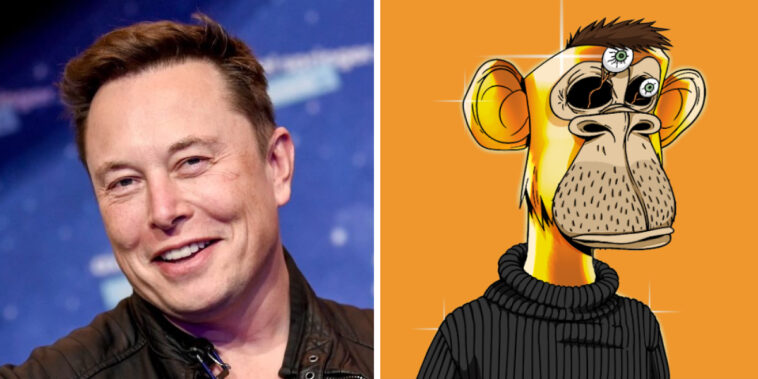 According to OpenSea’s transaction data, the sale of Bored Ape #1837 closed on February 25th at 3:04 AM. Chain Protocol’s CEO Deepak Thapliyal was the previous owner of this “eye-popping” ape. “0xDeepak” is the name of Thapliyal’s official OpenSea account.

On Twitter, Deepak Thapliyal said he expected to bring in at least 690.42 ETH for Bored Ape #1837. He also claimed that Elon Musk used the fiat-to-crypto service MoonPay to purchase Bored Ape #1837. 0xDeepak sent Bored Ape #1837 to the OpenSea address “moonpay-eth,” which is widely assumed to be MoonPay’s OS account.

Tesla’s CEO has yet to claim any involvement in this recent BAYC transfer. If Elon Musk did buy Bored Ape #1837, it would mark a significant change of heart to the NFT industry. Recently, Elon Musk has poked fun at the NFT craze on his Twitter feed.

According to Rarity Sniper’s data, only 46 of the 10,000 Bored Ape NFTs have solid gold fur. Of all possible fur types, gold is the rarest.

Bored Ape #1837 also has a black wool turtleneck. Just 2.4% of all Bored Apes are wearing this fashionable sweatshirt.

Two other traits that make Bored Ape #1837 special include his “short mohawk” hairdo and “crazy” eyeballs. These traits are only in 3.18% and 4.07% of Bored Apes, respectively.
Compared with other gold fur Apes, Bored Ape #1837’s $1.49 million sale is comparatively “cheap.” For instance, Bored Ape #8817 recently sold for $3.3 million on Sotheby’s metaverse auction house.