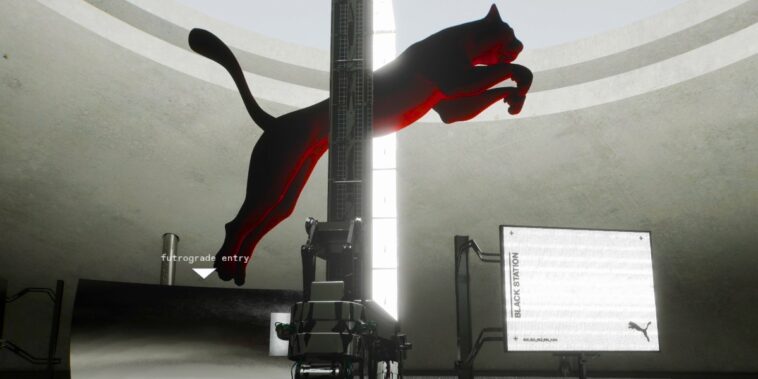 PUMA, a German sports company, has unveiled its Web3 portal for New York Fashion Week. Dubbed “Black Station,” the name of its visual design think tank 20 years ago, the metaverse destination is part experience and a place to redeem NFTs for IRL sneakers. Here are all the details.

The third portal in the lobby of Black Station ties into the company New York Fashion Week show. According to a press release, it is an interactive space full of “point cloud style effects.” Users will go through a digital adaptation of the show, where they can interact with the show’s pieces.

Adam Petrick, PUMA’s Chief Brand Officer, said that 20 years ago, Black Station was home to some of the company’s most innovative designs in fashion. He added that because the company is now pushing the boundaries between fashion and digital experiences, it made sense to bring the name back.

Black Station went live on September 7th and will be the home of PUMA’s Web3 metaverse activations going forward.

PUMA’s metaverse portal is certainly interesting news because it represents the company’s first large step into Web3. But PUMA isn’t the only sports apparel or shoe company that is diving into Web3. Here are three stories Rarity Sniper has covered involving shoe companies and the world of NFTs and metaverses.

Our first two stories come from Nike and its subsidiary RTFKT. Two weeks ago, Nike ranked atop of all companies for NFT sales, amassing a whopping $185 million. The “swoosh” company produced all its collections with RTFKT, a native Web3 company that it bought earlier in the year.

Three months ago, Nike and RTFKT made news with the purchase of ENS domain name “dotswoosh.eth.” RTFKT bought the name for 19.72 ETH or around $35,000. RTFKT now has 10 ENS domain names in its wallet, all related to NFT collections co-produced with Nike.

Eight months ago, Adidas got into the act, launching an NFT collection in partnership with Prada. It marked the third collaboration between the two companies but the first to utilize NFTs and the metaverse.

PUMA scores major points for creating a full-fledged metaverse portal for its first big step into Web3. Here at Rarity Sniper, we’ll keep our ears to the ground for further developments in the story.