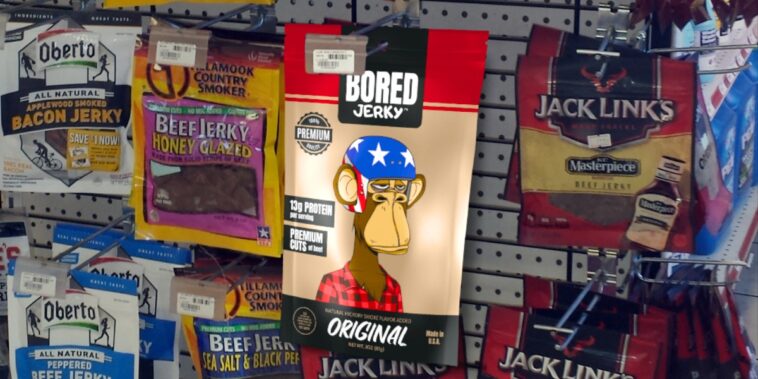 The Bored Ape Yacht Club community members the Nelk Boys are ready to introduce the world to a new brand of your favorite gas-station snack: beef jerky. The brand is called “Bored Jerky,” and it’s based on their Bored Ape non-fungible tokens (NFTs).

News that the brand was verified as a business was announced today via Twitter, but the Nelk Boys’ manager John Shahidi first teased the Bored Jerky on a podcast last year in an interview with Bored Ape founders Gordon Goner and Garga. Shahidi told the founders that his team has access to convenience stores and gas stations, two of beef jerky’s main shops.

According to the news, three flavors of jerky are currently in the lineup. They include Spicy, Peppered, and Original — and there are whispers that a Teriyaki flavor is in the works. The flavors will each line up with a specific Bored Ape NFT.

According the Nelk Boys’ Twitter feed, several large orders have been confirmed in a number of markets throughout the U.S., including the states of New York, Florida, Texas, Oregon, Kentucky, and California.

Some of the stores that will carry Bored Jerky include 7-11, Liquor Barn, Rebel Stores and more. For now, people interested in learning more about the Bored Jerky from the Nelk Boys can sign up to receive information on their site.

The Bored Ape jerky from the Nelk Boys is big news for BAYC members and jerky fans around the U.S. But the Nelk Boys aren’t the only ones using their BAYC NFT intellectual property (IP) rights to launch businesses and products. We’ve written several similar stories. Here are the top three.

First, in June, legendary rapper Snoop Dogg announced his new pastry shop, “Dr. Bombay’s Sweet Exploration.” The pastry and dessert shop will have a physical location in Los Angeles and be themed around his Bored Ape #6723 — aka “Dr. Bombay.”

Finally, the American fashion retail store Old Navy partnered with the BAYC to design a range of Bored Ape-themed T-shirts. The first shirt featured the sad face of Bored Ape #7285, which Old Navy licensed for the clothing line.

NFTs are only as strong as their community, and there are few NFT communities in the world that are as entrepreneurial-minded, active, and ambitious in Web3 as the BAYC members. Who knows if Bored Jerky is what the world needs — but then again, why not?