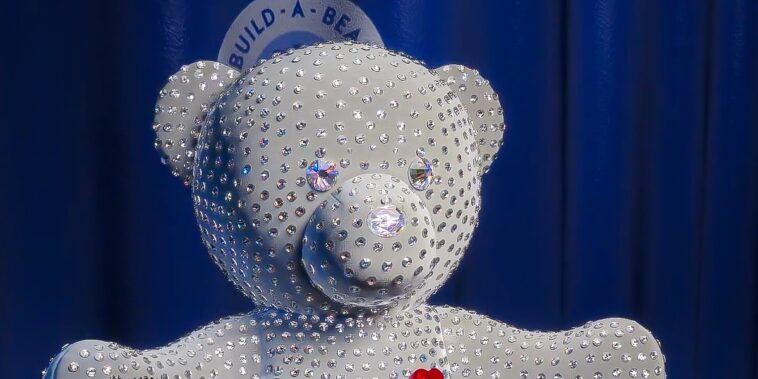 Build-A-Bear is commemorating its 25th Anniversary by launching its first non-fungible token collection. The hands-on American teddy bear retailer is partnering with NFT platform Sweet for the drop, which will place over three stages beginning October 4th and feature digital and real-life collectibles.

The NFT launch kicks off with the auction of the Build-A-Bear 25th Celebration NFT Collectible featuring Swarovski Crystals. The winner will also receive a one-of-a-kind physical teddy bear and a trip to St. Louis on October 22nd for the brand’s 25th Anniversary Gala.

The auction starts on Tuesday, October 4th at 12:00PM ET and runs through Thursday, October 6th at 7:00 PM ET. The digital NFT and its physical counterpart have an opening price starting at $2,500. 10 percent of the sale proceeds will go to the philanthropic arm of Build-A-Bear, which donates the furry friends to charitable organizations around the world.

Luckily, the exclusive 1:1 drop won’t be the only opportunity for fans of Build-A-Bear to get involved. In November, bidders can compete to win five 1/1 Silver themed Bear NFTs that also come with a physical Build-A-Bear Plush Bear.

But the most accessible phase of the Build-A-Bear and Sweet partnership is staged for December when there will be a generative NFT collection drop. Users will be able to purchase bear themed NFTs with unique traits, features, and rarity rankings. The NFTs will be minted on the Polygon blockchain.

Although the lull in the crypto market has had its effect on NFT prices, it hasn’t stopped Build-A-Bear and other brands from investing in Web3. At Rarity Sniper, we’ve covered several top American brands and companies releasing NFT collections in recent months. Here are three of our top stories.

Next, speaker company JBL teamed up with American singer Doja Cat for an NFT collection that comes with IRL utilities. Holders of the collection (which was launched with the help of Web3 platform OneOf) will be granted access to upcoming JBL events and performances, as well as other perks and rewards.

Interestingly, Build-A-Bear is rolling out its NFT launch over the course of several months, and its first drops will be small, exclusive collections. This could allow the company to wade slowly into Web3 and learn more about how nascent technologies can help it expand its customer base and create more innovative products. We’ll be checking back with Build-A-Bears in a couple of weeks to see how its first NFT drop goes.