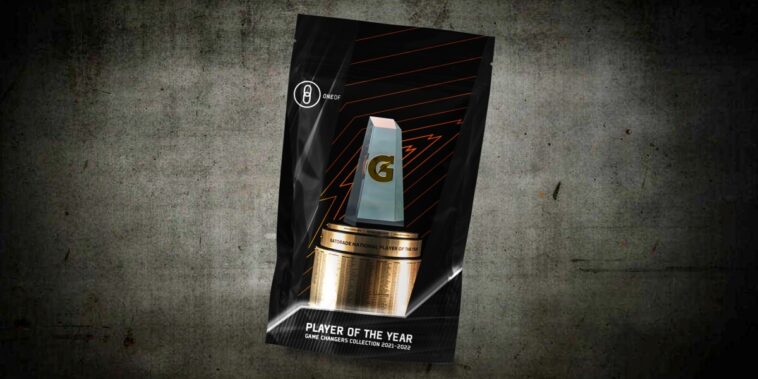 Gatorade, an American sports beverage, is launching its first NFT collection — a celebration of the best high school athletes in the country. According to a press release, the mint will comprise two parts and take place on the NFT marketplace OneOf.

The first part of the drop will honor the top high school athletes in the United States and be open to the public. Users can purchase a “pack” of three NFTs — in this case, sports digital collectibles — with a randomized distribution. This means the buyer won’t know what athletes they have received until they open the pack.

The second part of the drop will go directly to the Gatorade Players of the Year in the 12 sports categories for the 2021-2022 year. Gatorade will drop personalized NFTs into these winners’ wallets, a sort of token that goes along with other IRL prizes and honors they will receive.

Gatorade is making its first NFT drop part of a charitable effort. All primary and 8 percent of secondary sales will go to Good Sports, an organization that “drives equitable access” to sports and physical activities in high-need communities. Good Sports aims to support children to achieve their greatest potential on the field and in life.

As of now, the Gatorade NFT drop has ended. Because it was an open edition mint, there was no limit on how many users could purchase. There are over 2,600 listed for purchase on the OneOf marketplace, with prices ranging from $4 to the thousands. To Rarity Sniper’s knowledge, this is also Vayner3’s first NFT drop since rebranding from VaynerNFT to target a wider, Web3 audience.

Gatorade’s first NFT drop is undoubtedly good news for the NFT industry, as it has been mired in a slump since the downturn in the crypto market. But make no mistake: Beverage companies are making moves in Web3 in 2022. Here are three examples.

First, there is Gatorade itself. Three months ago, it filed for a series of trademarks for Web3 use, including the famous Gatorade logo. There was no word about what Gatorade would use the trademarks until the news of the NFT collection broke.

Second, there is Coca-Cola. The beverage manufacturer created a 136-NFT collection for Pride Month, partnering with South African artist Rich Mnisi. The set draws inspiration from Mnisi’s interpretation of “love,” which means many things to him.

Third and finally, there is Tiger Beer Malaysia. One month ago, the company partnered with streetwear business Pestle & Mortar Clothing to produce an NFT collection. And it was an inspiring success, selling out in 10 minutes.

These examples and Gatorade’s first NFT drop show that beverage companies are far from finished in Web3. In fact, they may be just getting started.