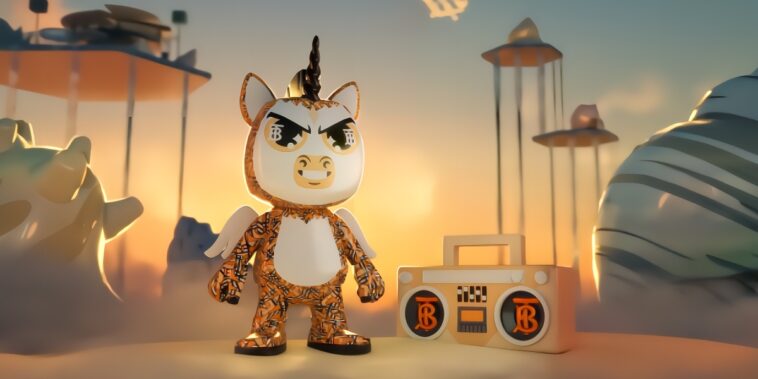 According to Burberry, Minny B. is a “kind, gentle, and cheeky character” that will highlight the brand’s TB Summer Monogram design. The Minny B. avatar has a spiral horn and a pair of wings gamers could use to soar through “Blankos Block Party.”

In addition to Minny B., Burberry will drop bonus NFT accessories in Blankos Block Party’s marketplace. A few virtual items customers could mint on June 22nd include:

Burberry will also reward anyone who still holds its first Sharky B. avatar with an NFT airdrop. People with a Sharky B. NFT will enjoy a free fashionable NFT hat.

Burberry launched 750 Sharky B. NFTs in 2021 for $299.99 each. Alongside Sharky B., Burberry minted jetpack, shoe, and armband NFTs for “Blankos Block Party” gamers.

Besides releasing new NFTs, Burberry plans to expand its presence in Mythical Games’ ecosystem. The fashion company announced it would open a virtual “cabana resort” called “The Oasis” where players meet with fellow avatars.

In a recent interview, Burberry executive Rachel Waller said her team was impressed by the excitement they saw surrounding their “Blankos Block Party” NFTs. Although Waller said critics argued only “young male consumer[s]” would engage with Web3 avatars, she has noticed that “women” and people of “different ages” interacted with this game.

And Burberry isn’t the only clothing company that sees this new opportunity in the blockchain gaming sector. Many of the world’s top names in apparel now have dedicated gaming divisions.

Nike is the most obvious example of this trend. First off, Nike acquired Clone X creator RTFKT Studios in 2021. The American sportswear brand also developed a highly successful metaverse experience in Roblox.

With numbers like these, more fashion brands will likely use Web3 games to drive customer engagement.