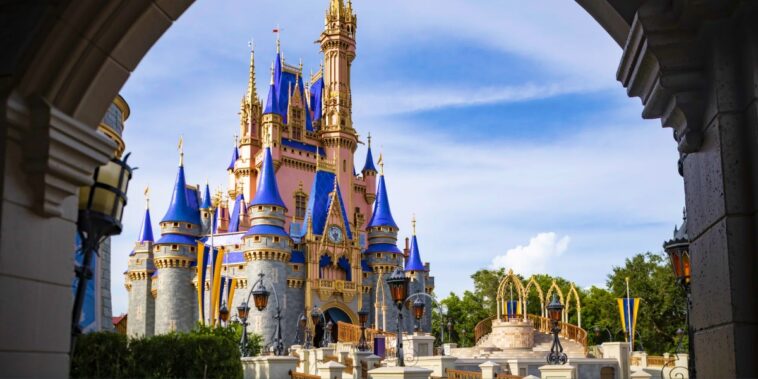 On Sunday, Walt Disney Co. discussed plans for how it will use nascent technologies like augmented reality (AR) and virtual reality (VR) to enhance storytelling over the next century.

Speaking at the company’s biennial D23 Expo in California, Chief Executive of Disney Bob Chapek laid out some of the entertainment conglomerates next steps in Web3. And though Chapek avoided using what he called the “M-word” (metaverse), it looks like the company is headed in that direction.

One detail Chapek noted was that Disney is planning to use data taken from customer’s streaming habits and theme park visits to deliver more immersive and personalized entertainment experiences in the future.

Chapek has spent years working on how Disney could expand its theme park experience to people who would never get the chance to visit one of the six theme parks globally, and it now looks augmented reality and virtual reality experiences are the answer.

Disney has been interested in new technologies for some time now. Last year, Disney appointed veteran media and tech executive Mike White to oversee the new Next Generation Storytelling and Consumer Experiences branch. One of his main tasks is to assemble Disney’s technological toolkit that Disney’s creative executives can employ.

Chapek also mentioned that the use of AR and other metaverse technologies will add a new dimension of storytelling to Disney’s bag of tricks. He referenced an eight-minute AR film that premiered this week on Disney+ and said fans could expect similar types of content to evolve over the next five to ten years.

Another sign Disney is headed into Web3 was the appearance of Aku at the D23 Expo. Aku is a metaverse character created by ex-Major League Baseball player Micah Johnson and was the only non-Disney character to be present at the event.

Disney Is Betting on Web3 and the Metaverse

The news about Walt Disney’s Web3 plans shouldn’t be a surprise to anyone paying attention to the entertainment conglomerate’s recent moves and investments. At Rarity Sniper, we’ve covered several stories this year about Disney in Web3. Here are three of the most relevant stories.

Earlier in the year, we reported that Disney was looking to hire a non-fungible token (NFT) expert. The new hire was tasked with helping manage Disney’s efforts and strategy in the nascent NFT space and securing key Web3 partners.

Next, Disney Parks collaborated with Meta Quest and ILMxLAB to create an exciting new Star Wars-themed VR adventure. The new experience will allow fans with a Meta Quest 2 headset to see a 360-degree view of the Star Wars universe and have action-packed adventures in the digital world.

Last but not least, Polygon became the only native blockchain to be admitted into Disney’s NFT AI Accelerator Program. The program is focused on “building the future of immersive experiences” through AI, NFTs, and AI characters to create memorable, lasting stories.

The arrival of new technologies like NFTs, the metaverse, and enhanced AR and VR devices is allowing entertainment brands like Disney to connect with fans in new and exciting ways. We will have to wait and see what experiences and projects Disney launches in the future. But one thing is certain: Disney is bullish on Web3.