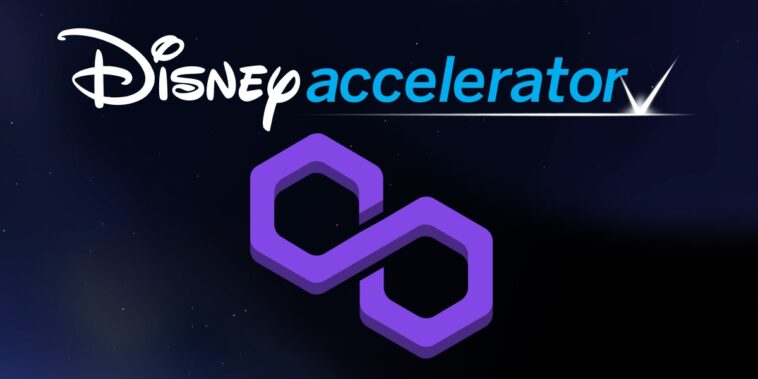 Polygon has already made waves this year, pledging to become the first carbon-neutral blockchain and playing host to several NFT projects. Now, it’s creating headlines for another reason: to become the only native blockchain in Disney’s Accelerator Program.

In a press release on the Accelerator Program’s website, Disney names Polygon as one of just six companies to be included in the short incubator. The others are Flickplay, Inworld, Lockerverse, Obsess, and Red 6. Flickplay and Lockerverse are the only other two that are overtly native to Web3.

This year’s Accelerator Program will focus on “building the future of immersive experiences” through augmented reality, non-fungible tokens, and artificial intelligence characters. The program is about business development or the “how” a company can use these technologies to create lasting stories, the kind people know Disney for.

Each company selected to participate in the program will receive guidance from Disney’s leadership team, and Disney will assign a dedicated mentor to each team. There will be a Demo Day in the fall where the teams presumably will share what they have been working on during the program.

Bonnie Rosen, the General Manager of the program, said that “for nearly a century,” Disney has leveraged new technologies to create the “entertainment experiences of the future.” She added that the Disney Accelerator Program would continue this legacy and bring magical stories to Disney fans for the next 100 years.

Polygon has been in the news quite a bit in 2022. It is one of the few blockchains that have publicly aimed at the harmful emissions this technology can cause. Many projects have chosen Polygon for drops because of its low fees and environmental friendliness. Here are three headlines from the world of Polygon in 2022, starting with its Manifesto.

Three months ago, Polygon released a Manifesto, saying it would become the world’s first “climate-positive” blockchain. To do that, it announced various changes, including tracking every transaction and purchasing more carbon credits.

Five months ago, Dolce & Gabbana selected Polygon for its DGFamily NFT drop. The NFT set would create three separate tiers of membership where members would receive a mix of digital, physical, and experiential rewards.

Then there was the news of six months. Rarity Sniper reported that Prada and Adidas were teaming up for an NFT drop on Polygon, a drop that allowed the companies’ fans to contribute their designs. It was the third partnership between the two companies but the first that used NFTs and the metaverse.

With this fresh news of Polygon joining the Disney Accelerator Program, there is no doubt the blockchain keeps trucking even during a bear market. Here at Rarity Sniper, we will keep our ears to the ground for more news.