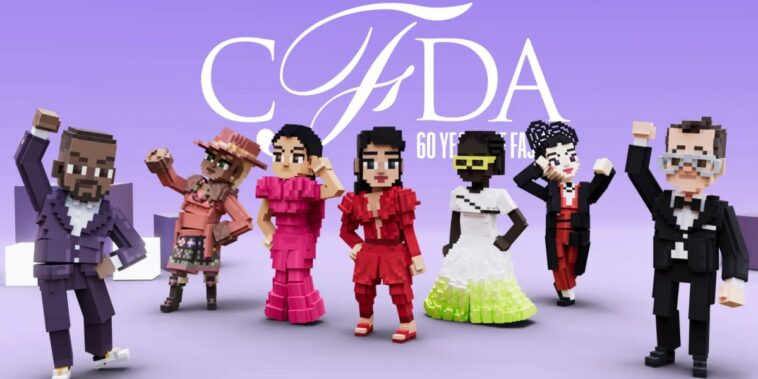 For its 60th anniversary, the Council of Fashion Designers of America (CFDA) is celebrating in unusual fashion: by launching an activation in The Sandbox metaverse. The activation, called “Fashioning the Shades of American Design,” will launch on December 19th and run for a month. It will feature 60 retrospective fashion designs, all voxelized to fit within theme of The Sandbox.

As part of the activation, the CFDA has partnered with seven designer brands to create 1/1 NFTs with special utility. Those seven brands are Coach, Michael Kors, Carolina Herrera, Tommy Hilfiger, Diane von Furstenberg, Vivienne Tam, and Willy Chavarria. The 1/1 NFTs will come with “money can’t buy” experiences like backstage passes to fashion shows and meet-and-greets with designers.

The CFDA plans to auction the NFTs from December 12th to the 16th through the NFT platform Brand New Vision. So far, the opening bids have reflected the unique utility of the NFTs, with some bids ranging between $15,000 and $25,000. Some see NFT technology as a way to democratize the fashion world, which has previously been mostly a walled garden.

For the CFDA, the activation is a way to pay homage to fashion’s history while looking forward to the future with Web3 technology. Some fashion designers have already experimented with Web3 tech, especially at large events such as the New York and Paris fashion weeks.

Although this event is CFDA’s first in the metaverse, it made Web3 news back in April when it announced a joint partnership with The Sandbox and Polygon, a layer-2 scaling solution for the Ethereum blockchain. At the time, Steven Kolb, the CEO of the CFDA, said that a goal of the partnership was to provide education in the Web3 sector for business leaders to come.

While many industries have entered Web3 this year, few have done so with as much gusto as the fashion industry. From launching NFT projects to tying digital assets to IRL utility, the fashion industry has shed its reputation as “high-brow” and engaged with Web3 degens frequently. Here are three such stories.

First, two months ago, fashion house Balmain announced it would be launching an NFT membership program. To do so, it partnered with MINTNFT. According to the press release at the time, the first batch of members would come before Paris’s Fashion Week.

Next, three months ago, Bloomingdale’s shared that it would launch a metaverse store to coincide with NY Fashion Week. The opening of the store also came as Bloomingdale’s celebrated its 150th anniversary. The virtual store contained collections from many top brands, including Baccarat and Byredo.

CFDA’s metaverse activation is big news for Web3 and shows that some organizations are still innovating in the sector. Here at Rarity Sniper, we’ll be paying close attention for further developments in the story.