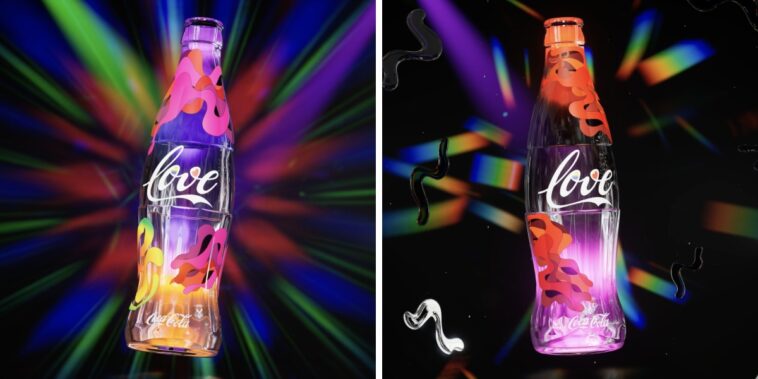 In another pairing between social causes and non-fungible tokens, beverage giant Coca-Cola has launched an NFT series benefiting the LGBTQ+ community. The NFT collection, Coca-Cola Pride Collection, contains 136 NFTs — one for each year the company has been in business.

For the series, Coca-Cola partnered with South African artist Rich Mnisi who has an interesting take on energy and love. Both, according to Mnisi, cannot be destroyed and can be transferred, changed in form, locked up, or released. According to the website for the collection, love can become “a number of things”: passion, darkness, trust, and heartbreak. But, most importantly, it is always there.

Mnisi imbued his understanding of love into the artwork for the NFTs. All 136 feature a standard Coca-Cola bottle with rainbow lights positioned around it. Some have additional traits like floating bottle caps. Like in most NFT collections, the NFTs vary in several traits and the styling of those traits. No two Coca-Cola Pride NFTs are alike.

Coca-Cola initially released the NFTs at a 1 ETH price. Today, the floor price for the collection has sunk to 0.23 ETH. They are available for purchase in MATIC, as the collection launched on the Polygon blockchain.

The proceeds for the initial sale will go to OUT, an LGBTQ+ charity in South Africa. It is the second-oldest charity in the country, according to initial reports. This Pride NFT Collection may be the first in an annual series from Coca-Cola, though the subsequent NFT collections remain undisclosed.

While many believe NFTs are solely a tool for personal profit, NFTs and fund-raising for charity have gone together at least since mid-2021. Both big companies and independent NFT collections seem to realize that the technology has good uses for giving back. Here are three examples.

Earlier this year, Nestlé released two NFTs: TRIX Globes with some animations. The company released them to raise awareness of TRIX’s debut in the Middle East, and they came with a charitable cause — the sale proceeds would go to the Emirates Red Crescent Charity.

Our second example comes from famous comedian and late-night talk show host Stephen Colbert. In November of 2021, he minted his AFT — a riff on the sometimes confusing technology of NFTs — with the sales proceeds to go to Donors Choose, a teaching organization. While the AFT started as a joke, it had a positive conclusion.

Lastly, there is the NFT collection Untamed Elephants. The ‘Phants, as they are known, raise money for elephant protection charities worldwide. It is an NFT collection that keeps on trucking, even during the crypto winter of 2022, primarily due to the team and community.

Coca-Cola’s foray into NFT charitable giving is another sign that this trend continues and that teams can use NFTs to raise money for their favorite causes.