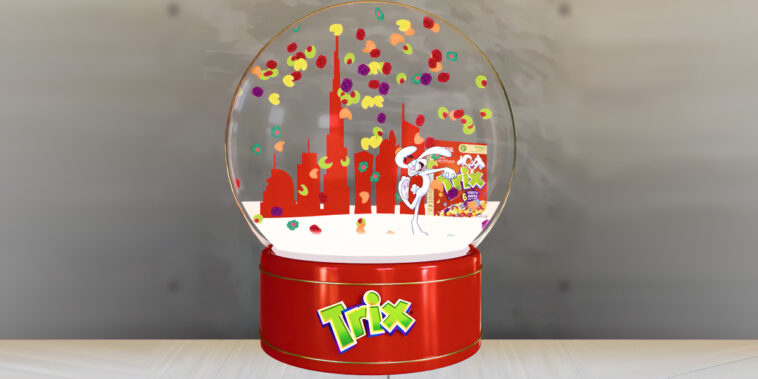 Nestlé, the company behind various cereals, has launched a pair of NFTs for a good cause: two globe-inspired animations that showcase Dubai’s skyline. The sale proceeds will go to the Emirates Red Crescent Charity.

The company created the NFTs to correspond with the Trix cereal line’s introduction into the Middle East. They are part of a larger narrative that has the Trix bunny searching for the world’s fruitiest cereals while exploring Dubai for the first time.

Emilien Mesquida, the business executive officer of Cereals Partners Worldwide, said in a press release that the company is proud to launch the first “blockchain-based initiative in the region” that goes to a humanitarian cause.

Bahaa Boumona, a brand ambassador at Cereals Partners Worldwide, says that the Trix pair of NFTs shows how “daring and adaptable” the brand is because the initiative is the first in the cereal world.

Both NFTs are currently up for auction on OpenSea. The auctions will finish in May 2022.

Although the NFT space is associated with intense trading and flipping, charity-based NFT collections are growing. As Rarity Sniper reported, Pampers has aligned its NFT collection with the Black Mamas Matter Alliance, which seeks to promote better black women’s maternal healthcare.

And on the homegrown Web3 side, several collections have sprouted up that make charitable giving their primary focus. The first was Untamed Elephants, which has raised tens of thousands of dollars to protect elephants in different parts of the world. Another is AlphaBetty Doodles, which has made donations to improve children’s education.

It is now standard practice in Web3 to donate part of the mint proceeds to nonprofit organizations. Women’s collections are mainly focused on this, often donating money to Girls Who Code or other organizations focused on bettering the lives of women and girls.

Time will tell how successful the Trix Globe NFT auctions are and how much money Nestlé can raise for the Emirates Red Crescent Charity. Although both auctions started at 0.1 ETH, the bidding has raised the floors to 0.37 on one and 0.39 on another. Nestlé will have raised roughly $2,150 for the Emirates Red Crescent Charity if both sold at those prices.